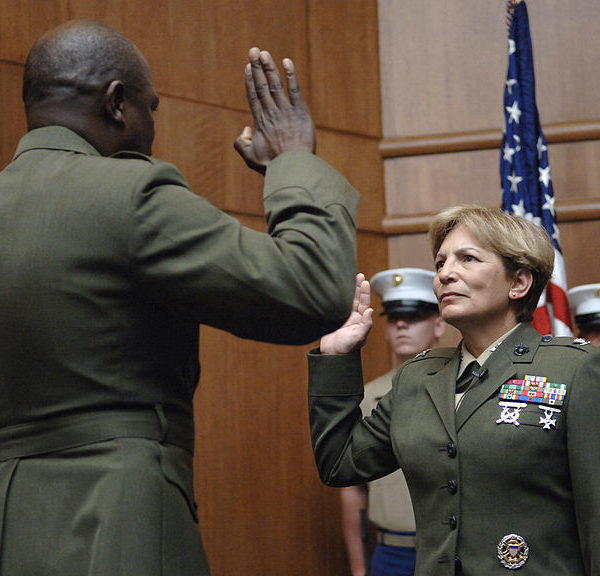 Angela Salinas was born on December 6, 1953 in Alice, Texas. She was the youngest child of five. Born to native Texan parents, she is a descendant of one of the first civilian settlers in Texas. Salinas holds Bachelor’s degree in History from Dominican University of California and a Master’s degree from the Naval War College.

Salinas enlisted in the U.S. Marine Corps on May 1974 at Parris Island. She was subsequently assigned as a legal services clerk (MOS 4421) at Marine Corps Base Camp Pendleton, the Marine Air Reserve Training Detachment in Alameda, and the inspector-instructor staff for 4th Reconnaissance Battalion in San Antonio until 1977.

In 1977, Salinas was selected for the Enlisted Commissioning Program and in December 1977 she was commissioned as a Second Lieutenant. She was subsequently assigned to the 2nd Marine Aircraft Wing at MCAS Cherry Point and served as a legal services officer. In 1980, she was assigned to Woman Recruit Training Command at Parris Island, where she served as a series commander, executive officer, and battalion operations officer.

In 1986, Salinas assumed command of Headquarters and Service Company, 1st Maintenance Battalion until 1987, when she became the deputy G-1, 1st Force Service Support Group, both at Camp Pendleton. In 1988, she was transferred to serve as the executive officer for Recruiting Station Charleston, then assumed command the following year. In June 1989, Major General Salinas assumed command of Recruiting Station Charleston and became the first woman in the Marine Corps to command a recruiting station. In June 1992, she served as a Combat Service Support Ground Monitor for the Manpower Management and Officer Assignments at Headquarters Marine Corps in Washington, D.C. She was responsible for the assignments of over 1,000 senior officers.

In 1993, Salinas became a Deputy, a Special Assistant for General/Flag Officer Matters, Office of the Director, Joint Staff at the Pentagon. In 1996, she assumed command of the 4th Recruit Training Battalion at Parris Island. In 1999, she served as the Assistant Chief of Staff, G-5, for III Marine Expeditionary Force, Okinawa, Japan. In May 2001, she assumed command of the 12th Marine Corps District, the first woman to serve as a Recruiting District Commanding Officer. From 2004 to 2006, Salinas served as Chief of Staff, Marine Corps Recruiting Command at Quantico.

On August 2, 2006, Salinas was promoted to the rank of brigadier general. On August 4, 2006, she assumed command of Marine Corps Recruit Depot/Western Recruiting Region in San Diego. She transferred to direct the manpower management, Manpower and Reserve Affairs at Marine Corps Base Quantico in August 2009. In March 2010, she was selected for promotion to Major General and promoted on May 12.

In 2013, Salinas retired after 39 years of military service as the highest ranking female in the USMC, at the time of her retirement. Salinas currently resides in Texas.