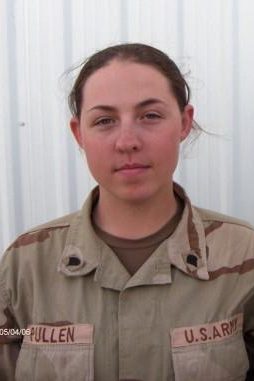 Specialist Pullen, with the Kentucky National Guard’s 617th Military Police Company, deployed to Iraq in 2005 at the age of 21. She was driving one of three Humvees providing security for a 30-vehicle convoy in Baghdad when they found themselves under enemy attack, firing from multiple directions. Her convoy stopped and began firing back as she heard a call for help over the radio.

She backed her Humvee into a better position, jumped out, and ran 90 meters through the line of fire toward the injured soldier. She administered first aid, calmed him and did everything she could to save his life.

As she was treating him, another soldier began to launch a shoulder-held rocket. He warned of the firing, but Pullen couldn’t move her and the wounded soldier out of the way fast enough. She shielded the soldier with her own body to protect him from the blast – a blast that threw her from him and onto her back. She then helped transport wounded soldiers to a makeshift landing zone for evacuation by helicopters

About 27 insurgents were killed during the attack, and six were injured. For her efforts, Pullen was awarded the Bronze Star with a “V”  for Valor on June 16, 2005.