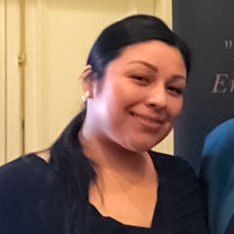 Mayra Galeas is a program coordinator for Foundation for Women Warriors. Mayra started with Military Women In Need in 2015 and has since been working with female veterans and their children throughout Southern California. She is a member of the USC Veterans Collaborative and the Orange County Veteran and Military Families Collaborative.

Mayra was at the forefront for the development of the first childcare program specifically for women veterans that are working or attending school. The project began as a partnership with UCLA and STAR camps as a summer pilot program in June 2016. With the great success of the pilot, Foundation for Women Warriors made Childcare Assistance a permanent program to serve women veterans.

Mayra’s passion to serve female veterans began after witnessing her sister, a combat Marine, experience challenges in the military. Mayra was her sister’s support system while she served in the Marine Corps and through her transition into civilian life. The Los Angeles County Board of Supervisors honored Mayra for her work with women veterans in 2015.

Mayra began her career in social services 10 years ago. She has experience working with survivors of domestic violence, homeless services, rental assistance, HPRP, and permanent supportive housing. Ms. Galeas has a Bachelor of Science in criminal justice.