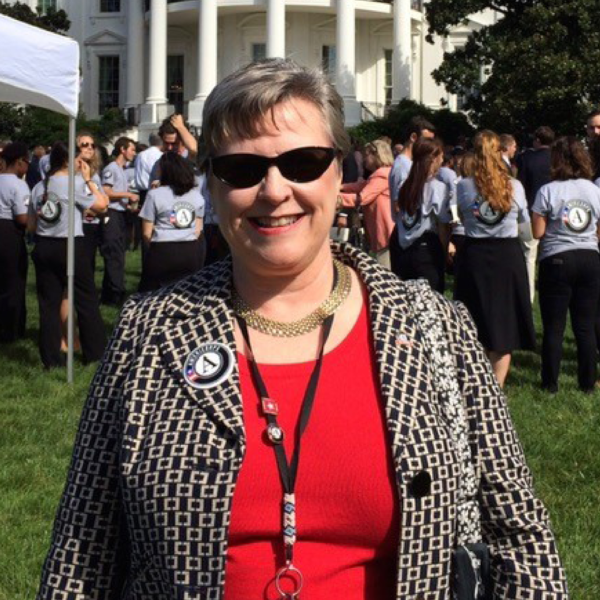 Rhonda Honegger, as a descendant of a long line of men in military service, became the first woman in her family, on both her mother and father’s side, to join the military. After growing up as a military brat, military service was a natural fit. She spent 10 years as a Navy Aerographer’s Mate (meteorology) and still contributes to data in the field with her own weather station in her backyard.

Post-Navy, Rhonda completed her bachelor’s degree in Restaurant and Food Service Management from Texas A&M – Kingsville, graduating number one in her class. She maintained her involvement with the Navy as an Ombudsman supporting military families across multiple spousal assignments. In 2006, she was selected as one of Hampton Roads Military Spouses of the Year for her work in response to Hurricane Katrina.

After a few years of managing restaurants, Rhonda resumed her dedication to public service as a federal leader within the grants management field at the Environmental Protection Agency, Federal Emergency Management Agency, and Corporation for National Service where she directed the Audit Resolution Department before retiring in 2018. While at FEMA, Rhonda deployed to dozens of disasters. She currently volunteers and supports multiple veteran organizations including Women Veterans Network (WoVen), Military Family Coalition, Service Women’s Action Network, Blue Star Families, and Women Veteran’s Alliance to name a few.

Rhonda is married to a retired Navy Chief and has two adult daughters. She enjoys photography, crafting, cooking, hosting art lessons in her home studio, and soaking in the rich history of Virginia and the Washington D.C. area.

Back To People
Women are integral to the U.S. military and now th