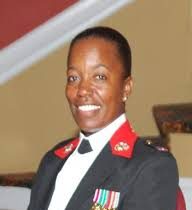 Carmen Cole enlisted in the Marine Corps in November of 1980 and became a motor transport maintenance mechanic at 2d Maintenance Battalion, Camp Lejeune. During her first assignment, she earned three promotions- Lance Corporal, Corporal and Sergeant.

She then went on to Parris Island, SC as a Drill Instructor, later becoming Senior Drill Instructor.  Then, in 1986, she reported to 3rd Maintenance Battalion Okinawa Japan where she served not only as a mechanic but also the battalion administrative chief.

In 1996, CW2 Cole returned to 3d Maintenance Battalion, Motor Transport Maintenance Company in Okinawa Japan as the Maintenance Officer, where she aided in the restructuring of two commands to form the 3rd Material Readiness Battalion. Two years later she returned to the U.S. and became the Inspector-Instructor Detachment-2, Augusta Ga., 4th Maintenance Battalion. She was the first female I&I to command active duty staff in support of the Marine Reserve unit at Augusta Ga. Cole was also promoted to Chief Warrant Officer 3 during this tour, which was her last.

CW3 Cole retired in 2001 after serving in the Marine Corps over 20 years. However, her dedication to the military didn’t stop there. After retiring, she accepted a position as the Senior Marine Instructor of Marine Corps Junior ROTC, Butler High School. This school had a MCJROTC program in place for 30 years, but never had a female instructor until Carmen Cole.