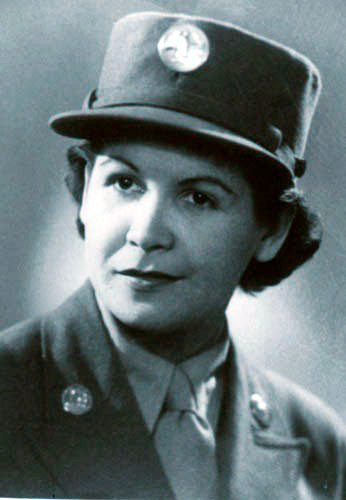 Carmen Contreras Bozak joined the Women’s Army Auxiliary Corps (WAAC) in 1942– just six months after the attack on Pearl Harbor. At that time, the Army was in need of bilingual women to work in cryptology, communications and interpretation job fields. Due to her Puerto Rican heritage, she became the first ever Hispanic woman to join the WAAC. With being able to speak five languages (Spanish, English Portuguese, Italian and French), she served as an interpreter.

Carmen volunteered to be a part of the 149th WAAC Post Headquarters Company. They had 195 women and were the first cadre of females to go overseas in 1943.

Upon arriving in South Africa, Carmen was assigned to the signal corps, performing duties of a teletype operator. She would transmit encoded messages between General Dwight D. Eisenhower’s headquarters in Algiers and the battlefield in Tunisia.

At the Algiers Army Headquarters, German air raids were very common. In fact, Carmen stated in a 2002 interview that she witnessed four air raids and the dropping of a bomb near one of the group residences. Serving overseas was especially dangerous for WAACs because they were technically “auxiliaries” to the Army, rather than being designated as members. Therefore, they did not have the same protections under the Geneva Convention as males in the Army.

After the war, she worked in various civilian jobs but continued to serve the military. She volunteered for the VA in Oakland Park for decades. In 1989, she started a chapter of WAC Veterans in Fort Lauderdale, Florida and served as the first president. She also founded a chapter of the Society of Military Widows in 1998.