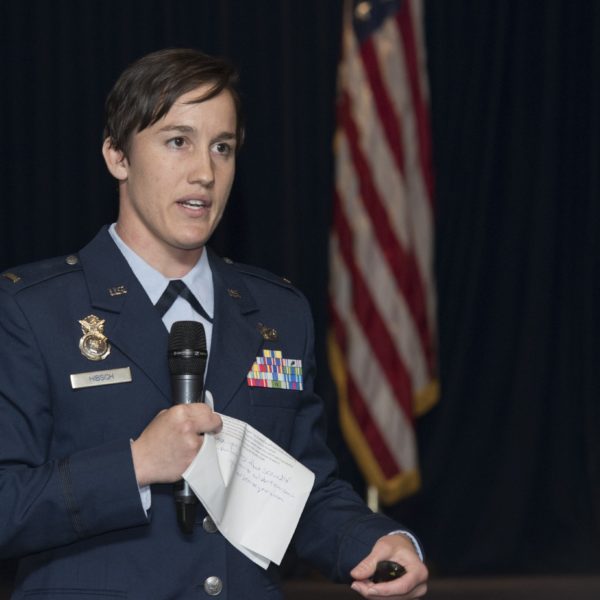 In August 2019, a New York native, former enlisted Airman and now 1st Lt., Chelsey Hibsch became the first Air Force female to earn the Ranger tab since the Army began allowing Airmen into Army Ranger School in 1955. Prior to this, she was with the 374th Security Forces Squadron at Yokota Air Base, Japan where she led Pacific Air Force’s 2018 Defender Challenge Team to six event trophies and the overall Defender Challenge Championship.

In order to qualify for a slot in the course, Airmen must attend the Air Force’s Ranger Assessment Course (RAC). Hibsch prepared herself by not only completing the RAC hosted by the Air Force Security Forces Center, but also further improved her skills by attending the Tropic Lightning Academy in Schofield Barracks, Hawaii.

When Hibsch was attending the RAC, she explained how it was “an unmatched learning experience on leadership and followership.” The instructors provide RAC as a stress-oriented battle course for Airmen to develop better leadership and command tools under the mental, emotional and physical strain, improving their resilience and coping mechanisms to better prepare them for the rigors of Ranger school. She told of how lessons learned in RAC could apply to Ranger school because she had an “understanding of how you function when you’re hungry, tired, wet, cold and worse.”

“Then, you have to lead a team of individuals feeling the exact same way,” she said. “You really find out a lot about your teammates and yourself in these stressful situations.”

Hibsch is now assigned to the 821st Contingency Response Support Squadron at Travis Air Force Base, CA as a flight commander. Upon arrival, she was projected to receive training for short-notice disaster response and combat zone airfield prep worldwide. She will be part of the teams who deploy on short notice to set up or restore airfields in hurricane response and go anywhere in the world where U.S. forces are in immediate need of a landing field for fixed-wing aircraft.