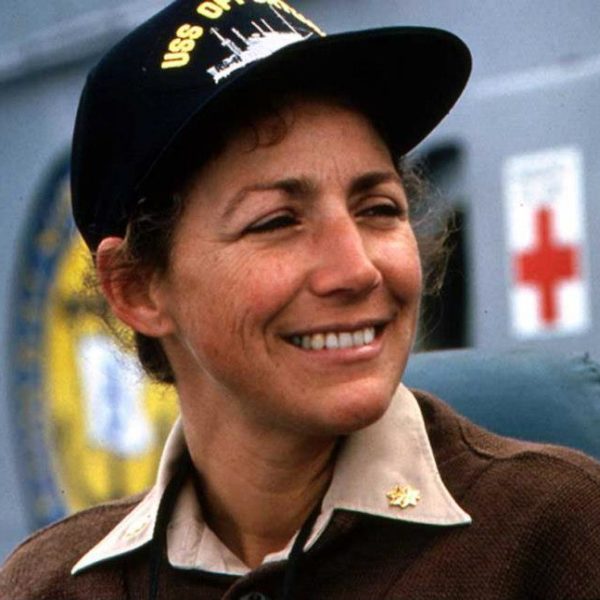 Taking advantage of the opportunities the Navy had to offer in the expansion of women’s roles that occurred in the 1980s and 1990s, She was one of the first female line officers to graduate from the Naval School of Diving and Salvage in Washington, D.C. in May 1980, one of the first three to do so. Her first assignment was in later that year in December 1980 as a diving officer on USS Hector (AR-7), a World War 2 vintage repair ship. Homeported in San Francisco Bay, my crew of 8 divers were the only diving locker in Northern California, and did many repairs and hull inspections on Navy ships stationed in Alameda, Mare Island, and Oakland. We also deployed to the western Pacific, including Yokosuka, Japan, Philippines, Melbourne, Australia, Nairobi, Kenya, Aukland, New Zealand, Tonga, Samoa as well as a two-month stint in Diego Garcia tending ships serving in the Arabian Gulf. That tour was followed by shore duty as an instructor in San Diego, but as soon as more ships opened to women in the mid-1980s, she requested a transfer. She served on four salvage ships, as an Operations Officer on USS Grasp (ARS-51) during her pre-commisioning and through her first year of commissioned service. Then Iskra was selected as an Executive Officer, doing a split tour on the USS Preserver (ARS-8) and USS Hoist (ARS40). In 1990 she was selected as Commanding Officer, the first woman to command a Navy vessel, and reported for duty on the USS Opportune (ARS-41) a rescue and salvage ship. Only 17 days after she took command they were underway in support of Operation Desert Storm towards the Suez Canal to intervene in case the Canal was mined or otherwise blocked. They picked up an [Explosive Ordnance Disposal] team in La Maddalena, Sardinia, and headed to an area on the Mediterranean side of the canal, where they stayed for the entire duration of the war. While in command she also participated in the Hurricane Andrew relief operations. Her tour lasted 26 months and then she remained on shore duty the remainder of her time in the military.

After the Navy she used the Montgomery GI Bill to go to graduate school. Iskra earned her BA at San Francisco State University, a MA in National Security and Strategic Studies from the Naval War College, and a MA and Ph.D. in Sociology with the specialty areas of Military Sociology and Gender, Work, and Family from the University of Maryland, in 2007. In 2002 she worked for Senator Maria Cantwell of Washington state as a Women’s Research and Education Institute (WREI) Congressional Fellow. During her fellowship, she helped staff and pass an amendment to the 2003 Defense Authorization Bill, which forbade the Department of Defense from requiring U.S. servicewomen to wear the abaya garment while stationed in Saudi Arabia. For this work, she was awarded the University of Maryland, College of Behavioral and Social Sciences Phillips Award in 2005. This award recognizes graduate student excellence in research most likely to affect public policy. She was also awarded the Center For Teaching Excellence, Distinguished Teaching Assistant for Academic Year 2003-2004 and the Charles H. Coates Graduate Research Award, University of Maryland, 2000-2001, for her Master’s thesis, which documented the continued negative discourse regarding women in the Navy over time. She studies the military and gender issues.

She then moved onto teaching and becoming a motivational speaker. Iskra also wrote two books about women in the military, “Breaking Through the ‘Brass’ Ceiling: Elite Military Women’s Strategies for Success” and “Women in the United States Armed Forces: A Guide to the Issues”, edited two books for the Women Divers Hall of Fame.

Her highest award was the Defense Meritorious Service Medal.

Without my service in the Navy, I would never have had any of these opportunities.