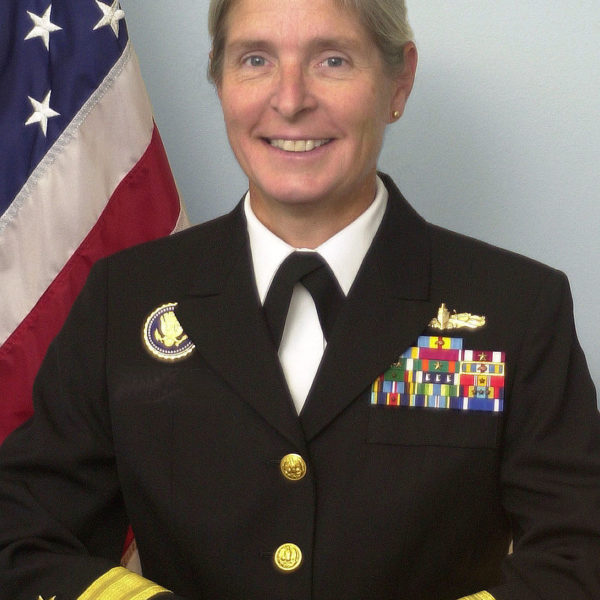 Deborah A. Loewer is from Springfield, Ohio. In 1976, Loewer received her Bachelor of Science degree in Theoretical Mathematics and Computer Science from Wright State University. She was selected as an Olmsted Scholar and studied at the Defense Language Institute in Monterey, California and the Goethe Institute in Stuttgart, Germany. Upon graduation, she went on to earn her Ph.D. in International Law from the University of Kiel in Kiel, Germany, in 1986.

From 1976 until March 1979, she served as the U.S. Navy’s Pay and Allowance Functional Manager at the Bureau of Naval Personnel (PERS-3) in Washington, D.C.

She was selected to be one of the first women officers in Surface Warfare and attended Surface Warfare Officer Basic Course in Newport, Rhode Island from April to June 1979, graduating number one in her class.

As one of the first women officers assigned to shipboard duty, then-Lieutenant, junior grade Loewer served on the destroyer tender USS Yosemite (AD-19) as Electrical Division Officer, Operations Officer, Navigator and Administrative Officer. While permanently assigned to Yosemite, Loewer served for several months on the staff of the Commander of Naval Surface Force Atlantic as design architect for shipboard computer systems.

Further assignments included a tour on the destroyer tender USS Yellowstone (AD-41) in July 1987, where as a lieutenant commander Loewer served as engineer and executive officer, and on board the fleet oiler USS Monongahela (AO-178), where she served as Executive Officer.

In February 1990, she reported to USS Monongahela (AO-178) and served as Executive Officer. In October 1991, Loewer returned to Washington, D.C., for duty on the Navy Staff as a long range strategic planner in the Strategic Concepts Branch (N513).

She served as Commander of the ammunition ship USS Mount Baker (AE-34) from November 1993 to August 1995. From 1995 to 1997 Loewer was the military assistant to Deputy Secretary of Defense John P. White, then from January 1997 to July 1998 she became Senior Military Assistant to Secretary of Defense William S. Cohen, and from December 1998 to July 2000 she became Captain of the fleet oiler USS Camden (AOE-2).

A year later, she assumed duties as Director, White House Situation Room and Director, Systems and Technical Planning Staff. She was selected for rear admiral (lower half) while she was in this position. She became Vice Commander of the Military Sealift Command in July 2003, headquartered in Washington, D.C. as such, Rear Admiral Loewer was second-in-command of a global transportation agency with a workforce of more than 8,000 and a fleet of more than 120 active ships whose primary mission is to move U.S. military cargo for deployed U.S. forces.

In 2001, she became the first warfare qualified woman promoted to the rank of Rear Admiral in U.S. military history. In May 2001, she assumed duties as Director, White House Situation Room and Director, Systems and Technical Planning Staff. On September 11, 2001, between 8:46 a.m. and 8:55 a.m., Loewer was traveling in President George W. Bush’s motorcade toward Emma E. Booker Elementary School when she learned of the first crash of an airplane into the World Trade Center from her deputy in the Situation Room at the White House. According to some reports, as soon as the motorcade reached the school, Loewer ran from her car to Bush’s car, and informed Bush.

From July 2003 to January 2005, Loewer served as vice commander, Military Sealift Command. Loewer became the commander of Mine Warfare Command on 13 January 2005.

Though now retired, she continues to contribute to the defense of our nation as Senior Advisor to the Undersecretary for Intelligence & Analysis, the Chief Intelligence Officer, at the Department of Homeland Security.

She is Rear Admiral (RDML) Deborah A. Loewer, USN Retired.