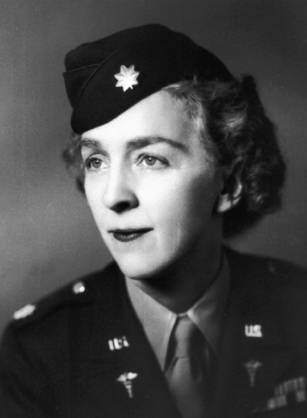 Margaret Craighill was born into a military family. She would become the third generation to join the military following her father and grandfather. Before she went into the military she focused her attention on becoming a doctor.

Margaret had an extensive education as usually required by someone who is pursuing a medical career. For her Bachelor of Arts (BA) and Master of Science (MS) she attended University of Wisconsin. She had a brief stint working as a physiologist with the Chemical Warfare Department of the U.S. Army and after she enrolled in the prestigious John Hopkins University School of Medicine. She graduated in 1924 with a Doctor of Medicine (MD).

One month after President Franklin D. Roosevelt signed the Sparkman-Johnson Bill into law allowing women to enter the Army and Navy Medical Corps, Margaret became the first woman to become a commissioned officer in the United States Army Medical Corps. She was assigned as the Women’s Consultant to the Surgeon General of the United States Army commanding the Women’s Health and Welfare Unit and liaison duty with the Women’s Army Corps (WAC). She was responsible for inspection of the field conditions for all women in the U.S. Army, which took her to areas all around the world traveling around 56,000 miles.

She fought for women in the military. She tried to establish set standard for medical care for women in the military including gynecological and psychiatric examination given to every applicant but was unsuccessful. She also recommended women be assigned positions based on their professional qualifications rather than their gender and tried to prove that women can handle multiple climates just as well as men. She also documented pregnancy and terminated pregnancy rates arguing that women who had an abortion did not deserve to be dishonorably discharge but should be allowed to remain in the military.

After the war, Margaret continued to fight for women as she returned to the Women’s Medical College of Pennsylvania. She tried to introduce a coeducation plan with Jefferson Medical College but was rejected. She moved on to a surgical position with the Veterans Administration at Winter Veterans Hospital. During her tenure, Margaret became the Chief Consultant of Medical Care of Women Veterans, she was one of the ten branch section chiefs around the country responsible for the oversight of medical care of women veterans.

Margaret ended up studying psychiatry using her G.I. Bill at Menninger Foundation School of Psychiatry and the New York Institute of Psychoanalysis. She opened her own private practice in medicine and psychoanalysis in New Haven Connecticut. She wrote several publication over the women’s psyche in the army (with two categories nurses and the Women’s Army Corps) including the Psychiatric Aspects of Women Serving in the Army.

Margaret remained in Connecticut for the rest of her life until her passing on July 20, 1977 at the age of 78.