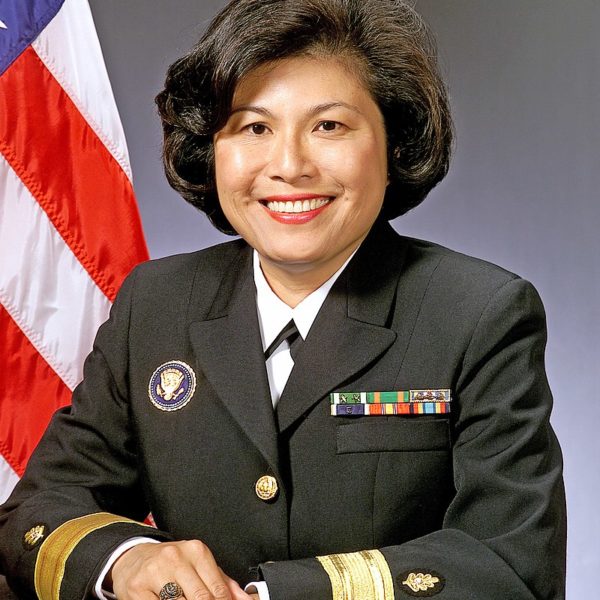 Eleanor Concepcion “Connie” Mariano was born at the Sangley Point Naval Base in Cavite City, Philippines in 1955. She is the eldest daughter of a career Navy enlisted serviceman and his wife, a dentist. When she was 2 years old, her parents moved to Hawaii. Her father served in the navy as a steward and eventually retired with the rank of Master Chief.

Mariano was the class of 1973 valedictorian of Mar Vista High School. In 1977, she received her Bachelor’s degree with honors in Biology from University of California, San Diego. After she graduated she joined the U.S. Navy. In the Navy, she received a medical degree from the Uniformed Services University School of Medicine (the nation’s military medical school) and commissioned as a lieutenant.

After her education, she began her internship and residency in Internal Medicine at the Naval Hospital in San Diego. Mariano served on the USS Prairie (AD-15) in the Indian Ocean and Western Pacific as the General Medical Officer and Medical Department Division Head from 1982-1984. Upon receiving board-certification in Internal Medicine, Dr. Mariano was assigned to the Naval Medical Clinic in Port Hueneme, California from 1986-1990 where she ran the Specialty Clinic and the clinic’s urgent care facility. In 1990, Dr. Mariano returned to the Naval Hospital in San Diego to become the Division Head of General Internal Medicine. Only a year away from being eligible for release from active duty, she was nominated by her commanding officer to serve as Navy physician and was personally selected by the incoming President, Bill Clinton, to be White House Physician and director of the White House Medical Unit. Dr. Mariano became the first woman in the military in to be appointed White House Physician when she joined the unit in June 1992, serving as a physician to President George H.W. Bush. As a result, she received an early promotion to captain on December 7, 1994. In the autumn of 1999, Mariano was nominated by the President to the rank of rear admiral (lower half); she was formally promoted in 2000. She became the first Filipino American in history to become a Navy Admiral on July 1, 2000.

In 2001, completing 24 years of active duty service, Dr. Mariano retired as a Rear Admiral from the Navy and left the White House to join the Mayo Clinic in Scottsdale, Arizona. In 2005, she went on to found the Center for Executive Medicine in Scottsdale, a medical concierge practice which provides presidential-quality medical care to CEOs and their families.

Hawaii State Senator Will Espero, submitted Mariano’s name to President Barack Obama for the position of Surgeon General of the United States in May 2009.

She is the author of the book, The White House Doctor: My Patients were Presidents, A Memoir, published in 2010 by St. Martin’s Press. With a foreword from Bill Clinton, the autobiographical book takes a look at the personal lives of the three American Presidents and three American First Ladies she had taken care of while working as a Physician to the President.

An expert in presidential health care including the 25th Amendment to the Constitution, Dr. Mariano is a frequent guest speaker on television and print media on the topics of care to VIPs, presidential disability, travel medicine, and optimizing quality of care. Dr. Mariano is also a former radio talk show host of House Calls on the Voice America network.