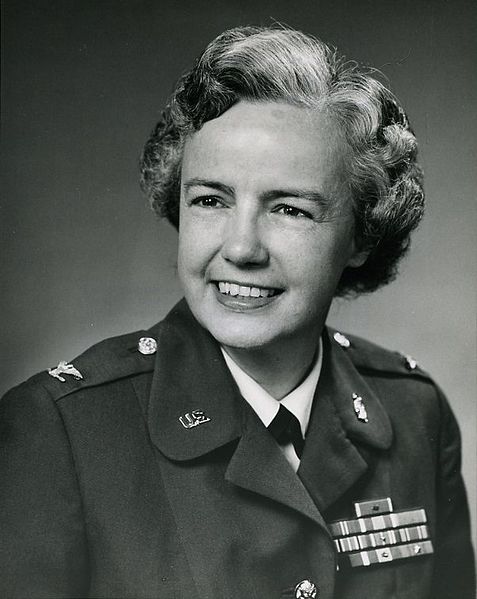 Elizabeth Paschel Hoisington was born in Newton, Kansas on November 3, 1918. She comes from a family of service members. Her grandfather, Colonel Perry Milo Hoisington I, helped to organize the Kansas National Guard. Her father, Gregory Hoisington, was a graduate of West Point and a Colonel in the Army. He was a direct descendant of Ebenezer Hoisington, a founder of the state of Vermont and a soldier in the American Revolution. Her brother, Perry Hoisington II, was a United States Air Force General. Elizabeth Hoisington’s 1970 promotion made them the first brother and sister generals in the United States military.

In 1940, Elizabeth Hoisington graduated from the College of Notre Dame of Maryland with a degree in Chemistry.

In November 1942 during World War II, Hoisington enlisted in the Women’s Army Auxiliary Corps (WAAC) and completed her basic training at Fort Des Moines, Iowa. At the time, women were required to serve in units before they could apply to Officer Candidate School (OCS), so Private Hoisington went to a WAAC aircraft early warning unit in Bangor, Maine. The company commander recognized her talents and promoted her from Private to First Sergeant soon after her arrival. She sought a mentor in a male First Sergeant so he could teach her what she needed to know. She said that he did such a good job that when she reached OCS she never had to open a book.

In May 1943, Hoisington was commissioned as a WAAC Third Officer. A month later, when the auxiliary became the Women’s Army Corps (WAC), its officers changed to standard Army ranks and Hoisington became a Second Lieutenant. She deployed to Europe, serving in France after D-Day. Hoisington continued her career after World War II and advanced through the ranks to Colonel as she commanded WAC units in Japan, Germany, and France and served in staff assignments in San Francisco and at the Pentagon.

She was appointed the seventh Director of the Women’s Army Corps on August 1, 1965 and served from 1966 to 1971. As Director during the Vietnam War she visited WACs serving in Saigon and Long Binh in September 1967.

On May 15, 1970, President Nixon announced the first women selected for promotion to Brigadier General: Anna Mae Hays, Chief of the Army Nurse Corps and Hoisington, who were officially promoted on June 11 within minutes of each other. Because they were promoted in alphabetical order, Hays was the first woman in the United States Armed Forces to wear the insignia of a Brigadier General.

The Hoisington and Hays promotions resulted in positive public relations for the Army, including appearances on the Dick Cavett, David Frost and Today shows. Hoisington, who was noted for her quick smile and ebullient personality, also appeared as a mystery guest on the popular game show What’s My Line?