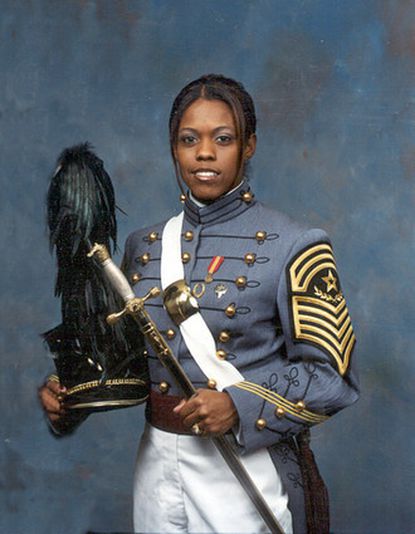 She graduated from Oxon Hill High School in Maryland, where she ranked among the top-10 students in her class. While in high school she helped begin an HIV-AIDS ministry. In July 2001, after graduation from high school, Perez entered the United States Military Academy at West Point. There she was a Cadet Command Sergeant Major and an exemplary student and talented track athlete, becoming the highest-ranking African-American female cadet in the history of West Point.

Following graduation from West Point in 2005, she was commissioned as a Second Lieutenant in the 204th Support Battalion, 2nd Brigade, 4th Infantry Division of the United States Army. Perez was deployed to Iraq in December as a Medical Service Corps officer. Perez was killed in action on September 12, 2006, while leading a convoy through Al Kifl, Iraq. She was killed when a makeshift bomb exploded near her Humvee during combat operations in Al Kifl, near Najaf. Age 23, she was the first female graduate of West Point to die in the Iraq War, the first West Point graduate of the “Class of 9/11” to die in combat, and the first African-American female officer in U.S. military history to die in combat.

Her former unit honored her by naming a street “Emily’s Way” and a medical center the “Emily J.T. Perez Treatment Facility”.

Emily Perez was the 64th female member of the U.S. military to be killed in Iraq or Afghanistan and the 40th West Point graduate killed since the September 11, 2001 attacks.

Perez was buried at the West Point Cemetery.