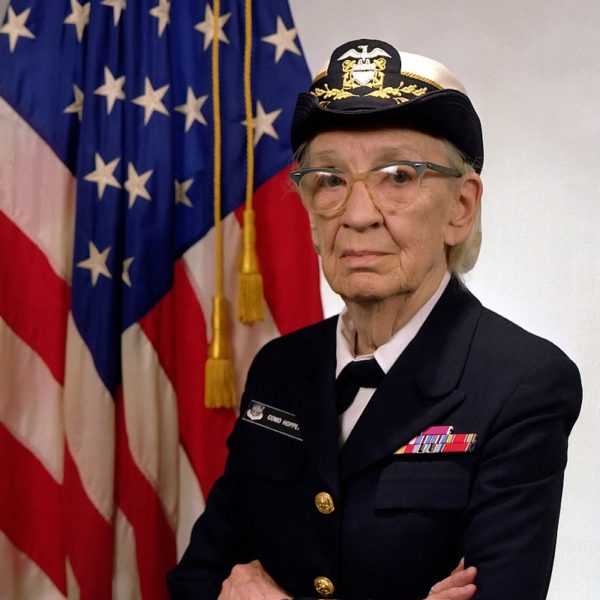 In 1943, Grace Hopper joined the U.S. Naval Reserve during World War II, serving in the program called Women Accepted for Volunteer Emergency Service (WAVES). From there, she was commissioned as a lieutenant junior grade and assigned to program the Mark I computer at the Bureau of Ordnance Computation Project at Harvard University.

She continued to work in computing after the war, leading the team that created the first computer language compiler, which led to the popular COBOL language. She had requested to transfer to the regular Navy at the end of the war but was declined due to her age (38), so she continued to serve in the Naval Reserves.

In 1966, commander Hopper retired from the Naval Reserve at age 60. However, she was recalled to active duty in August 1967 for what was supposed to be a six-month period, that turned into an indefinite assignment.

From 1967 to 1977, she served as the director of the Navy Programming Languages Group in the Navy’s Office of Information Systems Planning and was promoted to the rank of captain in 1973. She developed validation software for COBOL and its compiler as part of a COBOL standardization program for the Navy.

Hopper was promoted to commodore by special Presidential appointment in 1983. In 1985, the rank of commodore was renamed rear admiral, lower half. She involuntarily retired from the Navy in August 1986 at age 79. This made her the oldest serving officer in the service.

Commodore Hopper was often referred to as “Amazing Grace,“ due to her remarkable accomplishments and naval rank.

Commodore Hopper’s importance in U.S. naval history is apparent everywhere you turn: a destroyer was named after her (USS Hopper, DDG-70), as was the Cray XE6 “Hopper” supercomputer. As founder of the COBOL programming language, a precursor to many of the software code approaches of today, her work is legendary among computer scientists and mathematicians.” – Military.com