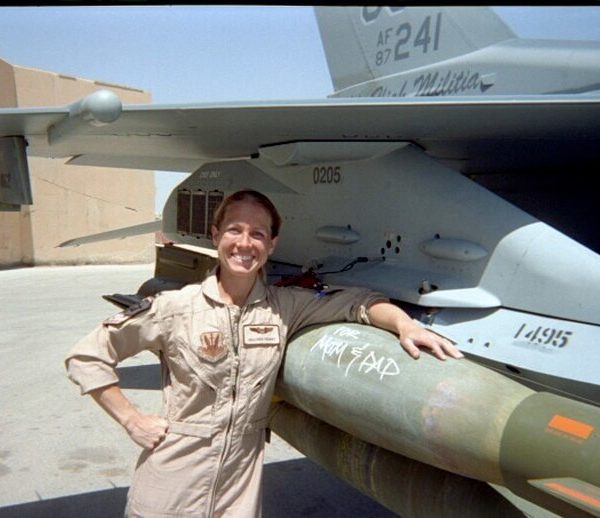 Heather “Lucky” Penney was born at Davis-Monthan Air Force Base in Arizona in 1974 to father John Penney a retired Air Force Lieutenant Colonel. John flew during the Vietnam War and later became a commercial pilot for United Airlines.

Penney got her pilot’s license at 18. When she was in college at Purdue University, she learned that women were not allowed to be fighter pilots. Although in 1993 they opened combat aviation to women, Penney didn’t learn about the change until she was in graduate school.

In 1996, she applied and was accepted at the District of Columbia Air National Guard and then two years later she was commissioned as an Air Force officer. She went to Texas to begin her undergraduate pilot training. That is where she earned her nickname “Lucky”. She among the first wave of U.S. female fighter pilots.

On September 11, 2001, Penney and Colonel Marc “Sass” Sasseville were chosen for a dangerous fatal mission. Penney was just a first lieutenant serving as a training officer with the 121st Fighter Squadron of the District of Columbia Air National Guard, based at Andrews Air Force Base outside Washington when she was told to intercept United Airlines Flight 93, which was believed to be headed to the U.S. Capitol, at whatever cost. There wasn’t enough time to outfit their aircraft with live ammunition so there only option was to ram the airplane. That would mean sacrificing their lives. At the time, Penney didn’t realize that there was a chance that her father could be the pilot of that flight, but when asked if that would have changed her mind about her mission, she said it wouldn’t have changed it. However, the brave heroic passengers fought back against the hijackers and during the fight the plane crashed into a field in Pennsylvania.

She went on to fly two combat tours in Iraq and eventually took a job at Lockheed Martin, where she worked to communicate between engineers, programs and Air Force customers.

Today, she’s a Senior Fellow at the Mitchell Institute for Aerospace Studies, and works on defense policy, research and analysis.

She’s also a mom to two girls. And she still flies.