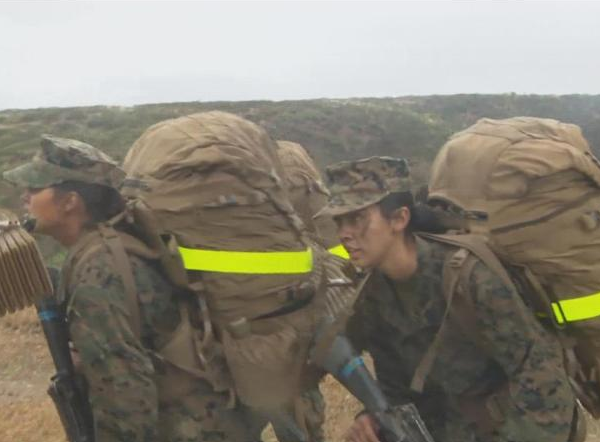 VISTA, Calif. — Women have been serving in the military since the Revolutionary War, yet many feel their service is overlooked by their male counterparts. Advocates for female veterans say that feeling of not being recognized can make it harder to transition into civilian life.

“Whenever we go to events. It’s always him getting recognized and getting a handshake, thank you for your service. But we are just seen as spouses,” said Cynthia Taylor who  grew up in a military family and married a U.S. Marine.

She is a proud wife of an active service member, but she is a veteran and would also like a handshake.

“I’m proud of my service. I’m proud of being able to serve with my brothers and sisters in arms. And I think it’s very important that more women are willing to speak out and not shy away from it,” said Taylor.

The mother of two served in the U.S. Army as a Specialist from 2007-2013 in logistics command.

Her co-worker at the Vista Foundation for Women Warriors non-profit, Navy veteran Petty Officer Second Class Stephanny Vaca says her service is also often overlooked by her husband’s time in the Navy.

“Being able to say that we serve it’s very prideful,” said Vaca.

The U.S. Department of Veteran Affairs says there are two million female veterans. They are the fastest growing segment in the veteran population and more at risk of becoming homeless.

Women have been serving their country since the Revolutionary War and today female veterans still feel their service has not been adequately recognized.

“This has led to women not believing that they’re veterans, not identifying as their veterans, and then also society at large not understanding the contributions that women have made to our national defense,” said Jodie Grenier, Foundation for Women Warriors CEO.

She served in the U.S. Marines for five years and transitioned from intelligence in national security to commanding the Foundation for Women Warriors.

“Having an organization that not only supports them in their transition, but also honors, the women who paved the way is truly critical to our country’s success into moving the needle forward with women’s empowerment,” said Grenier.

The non-profit was founded in 1920 and serves more than 14,000 female veterans in southern California with childcare assistance, emergency financial aid, education, and they have a mentor partnership with Fortune’s most powerful women.

“It’s really critical in their success in their trajectory,” said Grenier.

That success can be seen in those who are helping.

Taylor is the program coordinator at Foundation for Women Warriors.

“Being able to create that community and empower one another has been such an amazing thing to witness and be part of letting those women know they’re not alone, there is a community that they can be a part of after service,” said Taylor.

As America salutes military veterans this week for their service, remember not to forget the brave women who have proudly served in the armed forces.

“I would challenge everyone to consider our women veterans, but not only consider them, learn about a woman veteran in history and share that woman’s story with your family,” said Grenier.