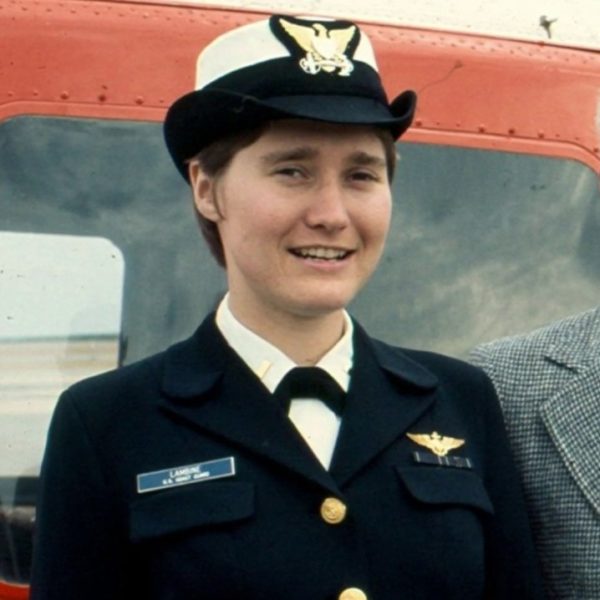 Janna Lambine, born in 1951 to a retired Navy Commander, was raised in East Walpole, Massachusetts.

Janna was released from Active Duty in January 1981 and began her Reserve career at the Marine Safety Office in Portland, Oregon and later became the Reserve Commanding Officer of Station Newport, Oregon.

She also served in a “temporary active duty” status as part of the Pacific Area staff on Coast Guard Island in Alameda, California. Janna used her GI Bill to get her MBA from Portland State University and worked for the American Red Cross Pacific Northwest Blood Services as the Assistant Administrator. Janna moved back to the east coast in 1990 and continued her Reserve duty with the Coast Guard Intelligence unit on Governor’s Island, New York and later at the Integrated Support Command in Boston, Massachusetts.

She was re-called to Active Duty during Operation Desert Storm and served on Governor’s Island for six months during and after the war. Her other Reserve duty assignments included Project Officer for OPSAIL Boston in 1992, Liaison to the Massachusetts Emergency Management Agency, and Project Officer for the transition of Marine Safety Office and Support Center Boston into the Coast Guard’s Integrated Support Center Boston.

Janna retired from the Reserves in 2000 as a Commander.

In her civilian life she was a trainer and exercise instructor for 18 years in Massachusetts. She currently enjoys life on Cape Cod sailing, kayaking, clamming, and walking the beaches.