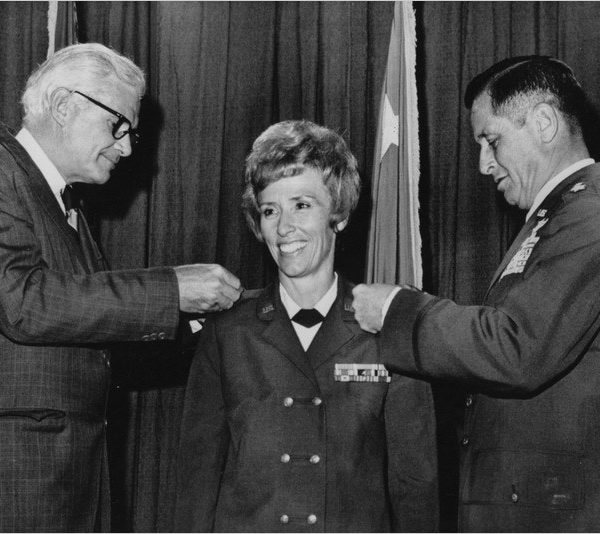 Jeanne Marjorie Holm was born on June 23, 1921, in Portland, Oregon. Holm was an accomplished snow and water skier, student of ancient history, scuba diver and skipper of her own power cruiser. Prior to entering military service, she was a professional silversmith. She enlisted in the Army in July 1942, soon after Congress established the Women’s Army Auxiliary Corps (WAAC). She attended Officer Candidate School at Fort Des Moines, Iowa, and in January 1943, received a commission as a Third Officer, the WAAC equivalent of Second Lieutenant.

During World War II, Holm was assigned to the Women’s Army Corps Training Center at Fort Oglethorpe, Georgia, where she first commanded a basic training company and then a training regiment. At the end of the war, she commanded the 106th WAC Hospital Company at Newton D. Baker General Hospital, West Virginia. After serving stateside during WWII, she left active duty in 1946 and attended Lewis and Clark College for two years, returning in 1956 for her Bachelor of Arts degree.

In October 1948, during the Berlin Blockade, Holm was recalled to active duty with the Army and went to Camp Lee in Virginia, as a company commander within the Women’s Army Corps Training Center. The following year she transferred to the Air Force and was sent to Erding Air Depot, Germany. There she served as Assistant Director of Plans and Operations for the 7200th Air Force Depot Wing and later as a War Plans Officer for the 85th Air Depot Wing, during the Berlin airlift and the early phases of the Korean War.

Holm returned from overseas in 1952 and became the first woman to attend the Air Command and Staff College at Maxwell Air Force Base in Montgomery, Alabama. She was then assigned to Headquarters U.S. Air Force in Washington, DC, as a personnel plans and programs officer in the Office of the Deputy Chief of Staff, Personnel.

Her next assignment was as Chief of Manpower in Allied Air Forces Southern Europe, a North Atlantic Treaty Organization headquarters, in Naples, Italy, where she served for four years. She returned to Headquarters U.S. Air Force in 1961 and was assigned as Congressional Staff Officer for the Director of Manpower and Organization. For her work in this assignment, she was awarded the Legion of Merit.

In November 1965 Holm was appointed Director of Women in the Air Force (WAF), in the Office of the Deputy Chief of Staff, Personnel. Her appointment was extended twice, making her the longest-serving WAF director. Holm played a significant role in eliminating restriction on women in service. She was responsible for overall staff cognizance of and advice on matters concerning military women in the Air Force. During her tenure, policies affecting women were updated, WAF strength more than doubled, job and assignment opportunities greatly expanded, uniforms modernized, opening ROTC and service academies to women, and changing the policies on the status of women in the armed forces. She was an active proponent for expanding the opportunities for women to serve in the Armed Forces and a catalyst for changing their roles and career opportunities within the Air Force.

Many have acknowledged her role in changing the opportunities for women in the military. Historian Walter J. Boyne acknowledged her “enormous influence on the role of women in the Air Force”. Air Force Brig. Gen. Jean Klick said “I can say in absolute candor and honesty that we wouldn’t have women in the Air Force without Jeanne Holm.” According to Brig. Gen. Wilma L. Vaught, “Gen. Jeanne Holm is recognized as the single driving force in achieving parity for military women and making them a viable part of the mainstream military.” For her exceptionally meritorious service in this assignment, she was awarded the Air Force Distinguished Service Medal.

On March 1, 1973 Holm was appointed director of the Secretary of the Air Force Personnel Council. In this position, she was responsible for administration of the council and functioning of its boards and served as president of: the Air Force Discharge Review Board, Personnel Board, Board of Review, Physical Disability Appeal Board, Decorations Board and the Disability Review Board.

Holm retired from the Air Force in 1975.

After retiring, Holm consulted for the Defense Manpower Commission. In March, 1976 Holm was named Special Assistant to President Gerald Ford for the Office of Women’s Programs. Holm helped Ford attract more female voters by reaching out to women’s groups and making note of women’s issues. Holm detailed for Ford a plan for presentation to the Justice Department which would authorize a full re-examination of the United States Code to determine whether the wording of any law was sex-based and not justified. Ford directed the Attorney General to begin the task and announced it to the public on July 1, 1976. At the polls, women voters favored Ford by a small percentage but were outnumbered by a larger male turnout. Males favored Jimmy Carter just enough to give him 50.1% of the popular vote.

Holm herself said that while “it’s a given” for men to serve their country, it’s not yet considered an obligation of citizenship for women — but it should be. She continued working towards that goal after retirement, which is perhaps why her 1986 book was titled “Women in the Military, An Unfinished Revolution.” Holm wrote two books about women in the military, beginning with Women in the Military: An Unfinished Revolution in 1982. Holm updated the book in 1992–1994, filling in American women’s combat and military experiences in the invasions of Grenada, Panama and in the Gulf War. In 1998, Holm published a history of American women serving in World War II, entitled In Defense of a Nation: Servicewomen in World War II, summarizing the experiences of women serving all of the military arms.

In 2003 Holm assisted author Linda Witt in her writing of the book A Defense Weapon Known to be of Value: Servicewomen of the Korean War Era, published in 2005. Holm described for Witt the history of the WAF in the early 1950s and the trials women experienced as they made their way through the male-dominated military.

On February 15, 2010 in Annapolis, Maryland, Holm died from pneumonia in both lungs. She was survived by her long-time friend and housemate, Lieutenant Colonel and Doctor Norma Loeser, (ret. USAF), and family members such as a brother, nephews, and nieces, including Kalynne Holm who worked with photos from the Jimmy Doolittle collection in 2006 for the Air Force Academy Library. Funeral services for Holm were conducted at Arlington National Cemetery on March 29, 2010, with full military honors.