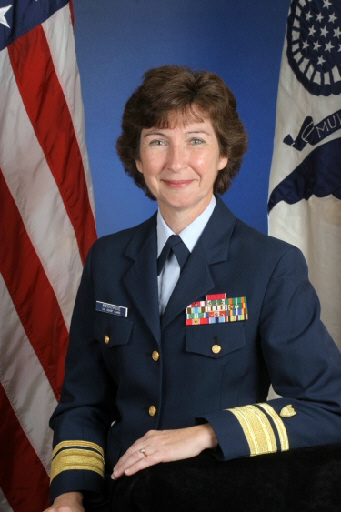 Jody A. Breckenridge grew up in Potomac, Maryland. She received a BS in Biology from Virginia Polytechnic Institute and State University, earned a Master’s degree in Public Policy from the University of Maryland and a Master’s degree of Science in National Resource Strategy from the Industrial College of the Armed Forces. While attending the University of Maryland, she was elected to the honor society of Phi Kappa Phi and was presented an Excellence in Scholarship award, graduating with honors.

Prior to her assignment as PACAREA Commander, she served as the Director, Strategic Transformation Team where she was responsible for aligning and synchronizing the efforts to transform and modernize the Coast Guard. Simultaneously, she served as Assistant Commandant for Human Resources where she had oversight of the Coast Guard’s HR professionals. From 2005-2006 Breckenridge served as Commander of the 11th Coast Guard District in Alameda, California, overseeing Coast Guard operations in the Southwest states of California, Nevada, Utah, and Arizona, and the Eastern Pacific Ocean. During her tenure, the 11th District stepped up its interagency collaboration leading to record drug seizures including the MV Gatun, the largest maritime interdiction in U.S. history, and the arrest of Francisco Javier Arellano Felix, head of the Arellano Felix drug cartel. Her initial flag assignment was as Commander, Maintenance and Logistics Command Pacific, with responsibility for all mission support in the Pacific Theater.

Breckenridge joined the Coast Guard in 1976 and was commissioned upon completion of Officer Candidate School in June 1976. Her first tour of duty was in the National Response Center, then Senior Watchstander. Afterwards, she was assigned to the Pollution Response Branch of the Marine Environmental Protection Division at the Coast Guard Headquarters. During that time, she served as a White House Social Aide. For a short time, she worked at the Coast Guard Academy for summer training programs.