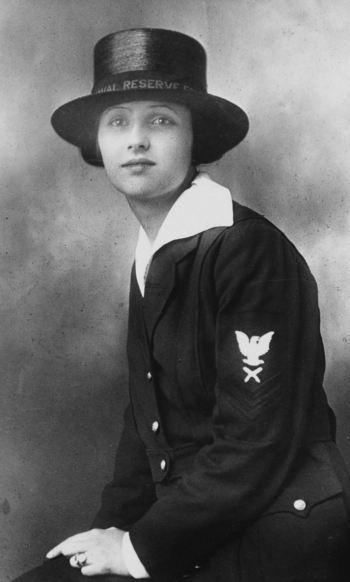 Joy Bright Hancock served in the U.S. Navy during both World Wars, was among the first group of women allowed to serve in the Navy, and instrumental in advancing their integration into the Navy.

Hancock was a licensed pilot and received degrees from the George Washington University, the Crawford School of Foreign Service, the Pierce School of Business Administration in Philadelphia, and the Paris Branch of the New York School of Fine Arts.

During World War I, Hancock was a Yeoman (F) First Class on duty at the New York Shipbuilding Corporation in Camden, New Jersey.  By the end of the war she was Chief Yeoman at the U.S. Naval Air Station in Cape May, New Jersey.  Following the war, she worked as a civilian employee for the Navy as the civilian head of Editorial and Research Section of the Navy Bureau of Aeronautics and the Special Assistant to the Bureau’s Chief.  In the first year of World War II she was a commissioned Lieutenant of the Women’s Reserve called WAVES (Women Accepted for Volunteer Emergency Service) in the U.S. Naval Reserve and rose through the ranks becoming a Captain. After the Women’s Armed Service Integration Act of 1948, Hancock was one of eight women to be sworn into the regular Navy.

She received commendations for her service to the Bureau of Naval Aeronautics and the Chief of Naval Operations (Air) during WWII and for her assistance in expanding opportunities for women in the Navy.  Following WWII, Hancock served as Director of the Women’s Reserve and then Assistant Chief of Personnel for Women.  She was instrumental in preparing the Women’s Armed Services Integration Act for passage.  Captain Hancock retired from active duty in June 1953 and passed away on August 20, 1986 and was buried at Arlington National Cemetery.

Back To Blog
Last week, a group of proud women gathered in fron

About 2,000 people celebrated the legacy of the WA