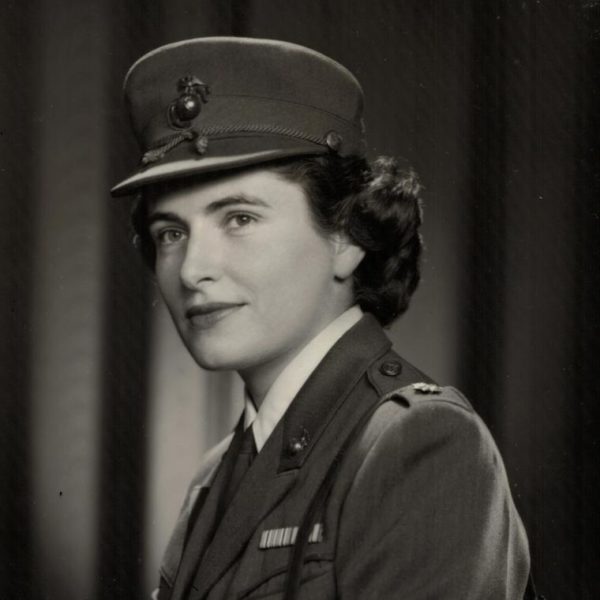 Julia Estelle Hamblet was born on May 12, 1916, in Winchester, Massachusetts to Martin and Marcia Coburn Hamblet, as the youngest of three children and the only daughter. She attended Hartridge School in New Jersey and then Vassar College in New York, graduating in 1937 with a bachelor’s in economics. She earned a master’s degree in Public Administration from Ohio State University in 1951.

After she graduated from Vassar College, Hamblet worked with the U.S. Information Service in Washington D.C. from 1937 to 1943. In April 1943, following her brother’s footsteps, she joined the military, signing up to the United States Marine Corps and was assigned to the first Marine Corps Women’s Reserve Officer Training Class at Mt. Holyoke, Massachusetts. She completed her training on May 4, 1943 and commissioned as a First Lieutenant in the Women’s Reserve.

During her tours of duty, she served at Camp Lejeune, Camp Pendleton, and Quantico. Before the end of World War II, she was commanding around 2,6000 women in the Aviation Women’s Reserve Group I, at the Marine Corps Air Station, Cherry Point, North Carolina. She was awarded a Letter of Commendation with Commendation Ribbon for her service during this period.

Although Hamblet was released from in July 1946, just two months later she was recalled to Headquarters Marine Corps in Washington, D.C. to succeed Katherine A. Towle and serve as a Major as the third director of the Women’s Reserve. Her time as Director would last from September 1946 to November 1948. The same year her term as Director ended, the Women’s Armed Forces Integration Act was passed moving the Women’s Reserve into a regular component of the Marine Corps and name the Women Marines. On November 4,1948, Hamblet accepted a commission as Major in the Women Marines and in August 24, 1949 she was promoted to Lieutenant Colonel.

In 1951, she was assigned as staff of the commander, Fleet Marine Force, Pacific, headquartered in Hawaii and in 1952, she was named Officer in Charge of the Women Officers Training Detachment, Marine Corps Schools, Quantico.

On May 1, 1953, she once again succeeded Colonel Towle, who was retiring, as Director of Women Marines and moving up in rank as Colonel serving as Director until March 1, 1959. She served as the longest and youngest Director of Women Marines. Later that same month, she was assigned duty in Naples, Italy, as military secretary to the Commander-in-Chief, Allied Forces, Southern Europe.

In May 1962, upon her return from Italy, she reported to the Marine Corps Recruit Depot, Parris Island, as commanding officer, Women’s Recruit Training Battalion, and served in this capacity until her retirement three years later on May 1, 1965.

Upon retirement, she was awarded the Legion of Merit for “outstanding service as planner, administrator and leader of Women Marines throughout a distinguished career which encompassed every major assignment in the women’s program…”. Col Hamblet was instrumental in opening active duty military to women instead of only having access to the reserve components.

During her retirement, Hamblet did volunteer work with the American Red Cross and the YWCA.