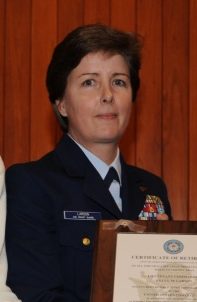 Kelly Larson, born Kelly Mogk, grew up in Seattle, Washington and enlisted in the Coast Guard in August 1984.

In 1986 she attended the Aviation Survivalman (ASM) “A” School and became the first female to complete the Navy’s Rescue Swimmer (RS) School on May 23, 1986 to become the first female ASM/RS in the Coast Guard. Kelly’s first aviation duty assignment was at Air Station Astoria, Oregon. During her three-year tour at Air Station Astoria, she qualified as a Rescue Swimmer in both the HH-3 and HH-52 helicopters.

One of Kelly’s most memorable rescues occurred in January 1989 when she exposed herself to hypothermic elements to free a downed Air National Guard F-4 pilot from his parachute and remained in the water for a back-up helicopter to recover her from the water while the first helicopter departed in order to expedite transport of the pilot to medical care. She earned an Air Medal and an in-person congratulations from then President George H. W. Bush for her heroic actions.

She continued her enlisted career at Air Station Sitka, Alaska between 1989-1992 before attending Officer Candidate School in 1993 and receiving her officer commission in February 1994. Remaining in an aviation career, she completed Naval Flight Training in Pensacola, Florida and winged on May 3, 1996 (Coast Guard Aviator #3278). Kelly transitioned into the Coast Guard’s HH-65 helicopter, and as an HH-65 pilot her operational flying tours included Air Station Humboldt Bay, California, Air Station Port Angeles, Washington, and the Coast Guard Aviation Training Center in Mobile, Alabama where she supported the Coast Guard’s Polar Operations mission aboard Coast Guard Icebreakers and served as an Instructor Pilot.

On December 21, 2009, Larson was presented with her letter of retirement by Capt. Anne Ewalt and Capt. Salvatore Palmeri. Before retiring from active duty in 2010 as a Lieutenant Commander, Kelly served as the Coast Guard District Thirteen Command Center Chief.  During that same year she also got married changing her maiden name Mogk to Larson.

After retirement, she continues to support Coast Guard operations in her role as a civilian, working as an Operations Unit Controller in the Coast Guard District Thirteen Command Center. She facilitates the allocation of resources, provides operational planning direction and oversight to multi-mission Coast Guard small boats, cutters, and aircraft within the diverse Pacific Northwest operating area (spanning 4 states, the US/Canada international border, and 3rd largest Naval fleet) and coordinates unified response efforts with foreign Rescue Coordination Centers and Department of Defense partners.

She was inducted into the Women in Aviation International Pioneer Hall of Fame in 2019.