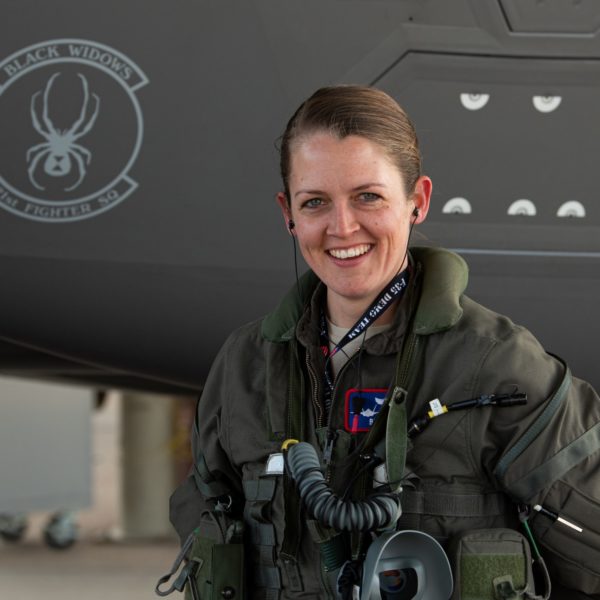 Captain Kristin “Beo” Wolfe of the 388th Fighter Wing at Hill Air Force Base, Utah, was recently appointed as the new team commander for the 2020-2021 air show season. She’s a second-generation fighter pilot and has transitioned to flying the F-35A Lightning II from the F-22 Raptor in 2017, racking up over 800 fighter hours across the two aircraft.

Before college, Kristin never even considered the military even though her father, a retired Col. Jon Wolfe, was an F-15C Eagle pilot who served 28 years in the Air Force. However, during her sophomore year, she realized she didn’t want a typical desk job. To her family’s surprise, she chose to join the Air Force and found it to be the experience she didn’t know she was looking for.

After commissioning, Wolfe attended undergraduate pilot training at Laughlin Air Force Base, Texas. She was then selected to fly fighter jets, eventually graduating to the F-22 as her first operational aircraft.

After flying the F-22 for three years at Joint Base Langley-Eustis, Virginia, in 2017, she transitioned to the F-35A Lightning II and then the 388th Fighter Wing, the Air Force’s first combat F-35 unit.

The F-35 team is scheduled to fly at 20 performances across the country with the Air Force Heritage Flight Foundation, in formation with legacy aircraft from the World War II, Korean War and Vietnam War eras.

As the pilot and demonstration team commander, Wolfe will fly the demonstration routine for two years, serving as a role model and inspiration to those that are interested in pursuing military service or a career in aviation. Part of her and her team’s mission will be helping young men and women realize the possibilities available to them.

When Capt. Wolfe was asked about the challenges of being a female fighter pilot, she answered,

“The jet doesn’t discriminate. The jet doesn’t know who is flying it, and it will always behave the exact same way,” Wolfe emphasized. “The fighter community is an extremely performance-focused field that’s based purely on merits and tactics. I don’t consider myself a female pilot, but a pilot that happens to be a female. I’m here to do a job, and that is to make this team the best out there, inspire people to be better, and to fly the F-35 as hard as I can.”