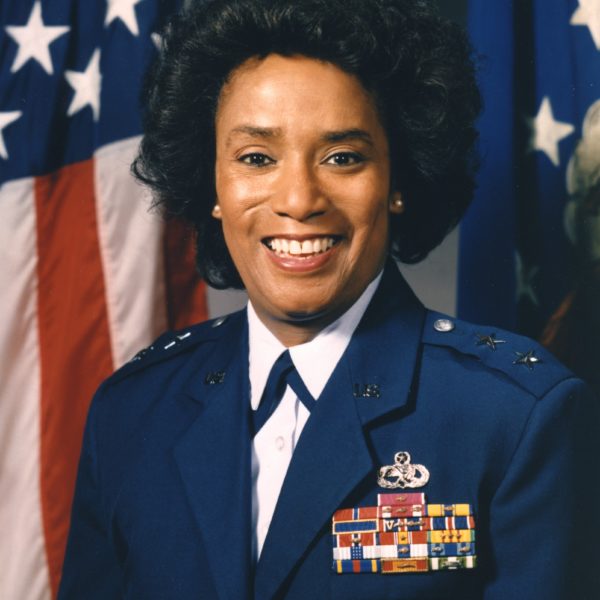 Marcelite J. Harris was born Marcelite Jordan to Cecil O’Neal Jordan and Marcelite Terrill Jordan, in Houston, Texas on January 16, 1943. She graduated from Spelman College, earning her B.A. in Speech and Drama. She originally wanted to be an actress but when she couldn’t find a job she signed up for the Air Force. In 1965 she completed Officer Training School, Lackland Air Force Base, Texas and held a variety of assignments in the Air Force.

Harris’s career included many “firsts”, including being the first female aircraft maintenance officer, one of the first two female air officers commanding at the United States Air Force Academy, and the Air Force’s first female Director of Maintenance. She served as a White House social aide during the Carter administration. Her service medals and decorations include the Bronze Star, the Presidential Unit Citation, and the Vietnam Service Medal.

Harris retired as a Major General in 1997, the highest ranking female officer in the Air Force and the Nation’s highest ranking African-American woman in the Department of Defense. Upon retirement from the Air Force, she served NASA as the Florida Site Director and Logistics Process Owner for United Space Alliance, the company managing the nation’s shuttle program. Besides her Spelman B.A., she holds a B.S. in Business Management from the University of Maryland University College. In 1999, Harris was awarded an Honorary Doctorate Degree from Spelman College. She was a member of Delta Sigma Theta sorority.

Harris was a Treasurer of the Atlanta Branch of the National Association for the Advancement of Colored People and served as a Director on the Board of Peachtree Hope Charter School. On September 15th, 2010, she was appointed by President Barack Obama to serve as a member of the Board of Visitors for the United States Air Force Academy. The Board looks into the morale, discipline, curriculum, instruction, physical equipment, fiscal affairs, academic methods and other matters relating to the Academy which the Board decides to consider.

Harris was married to Lt. Col. Maurice Harris. They had two children.

She passed on September 7, 2018 and was buried with full military honors on February 7, 2019, alongside her husband in Arlington National Cemetery.