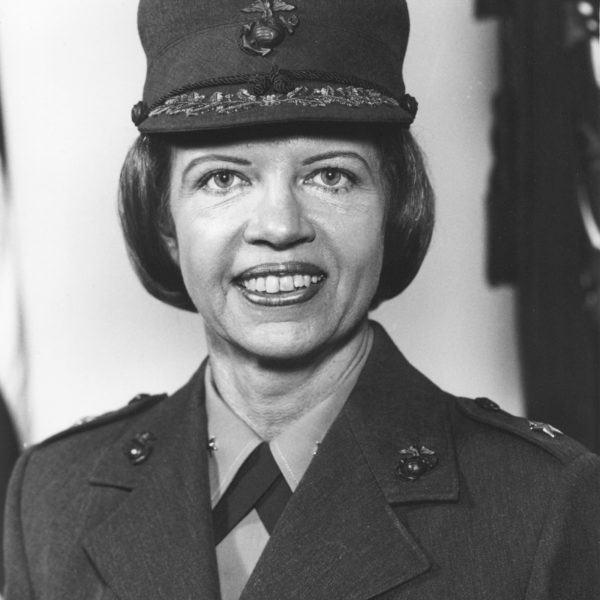 Upon graduating from the University of Michigan, Margaret Brewer attended officer candidate training and was commissioned as second lieutenant in March of 1952, during the Korean War. She was trained as a watch officer at Marine Corps Air Station El Toro, CA. She was then transferred to Brooklyn, NY to establish the first women’s communications platoon within the reserve program. This was just the beginning of her three-decade career, in which she became well known for her efforts for integrating females into the male-dominated workforce.

From 1956 to 1958, Brewer, who was a Captain at the time, served as commanding officer of the woman Marine companies at Norfolk, VA and Marine Corps Base Camp Lejeune, NC. She went on to serve as a platoon commander for woman officer candidates at Marine Corps Base Quantico, VA, and a woman officer selection officer in Lexington, KY. In 1963, she became the executive officer, and later commanding officer, of the Woman Officer School. Here, she oversaw female officer candidate training as well as enlisted women’s training at the noncommissioned officer leadership school.

In 1966, Capt. Brewer transferred to 6th Marine Corps District in Atlanta to be the public affairs officer. She assumed this billet with no formal training besides a two-week course at the Defense Information School at Fort Benjamin Harrison, Ind. During this assignment, she was promoted to lieutenant colonel, which was the most senior rank a woman could hold at the time.

Following this, Lt. Col. Brewer became the deputy director of Women Marines at Headquarters Marine Corps in 1968. Her responsibilities included the inspection of all female Marines from clothing, personnel and training to facilities and health, welfare and morale. During this time, she was promoted to colonel and in 1972, assumed duties as director of Women Marines. She fought to maintain women’s presence in the Corps and better integrate them with their male counterparts. Separate women Marine companies started dissipating as women became eligible for career-type formal and technical training and to obtain the rank of sergeant major.

“Many people felt that the women were somehow a separate Corps which was never the case,” Brewer said in a 1983 interview with the Marine Corps History Division. “But that was the perception that there sometimes was, because of the separate women’s administrative units, as well as the fact that there was a director of women Marines.”

During her time as director, all military occupational specialties, except small arms technicians, pilots, aircrew and infantry and artillery fields were opened to women. Additionally, Capt. Brewer played a crucial role in the development of regulations for pregnancy and parenthood– the standards implemented then are still in place for female Marines today.

While working alongside the deputy chief of staff for manpower, Brewer made recommendations to review all existing regulations and policies, eliminating or revising those that differentiated in the treatment of men and women without reasonable justification. This resulted in assigning women to more challenging, career-enhancing billets. The most controversial of her recommendations, however, pertained to the establishment of a pilot program to assign women to the Fleet Marine Forces (FMF). Her pilot program that consisted of sending female Marines to the 1st Marine Division and 2nd Marine Aircraft Wing was successful, and female Marines have served alongside their male counterparts ever since.

In 1978, as the Corps made strides to further integrate women and enhance their roles, the Office of Women Marines was terminated, and Brewer returned to public affairs as the deputy director of the Division of Information at Headquarters Marine Corps. This is also when President Jimmy Carter nominated her for appointment to brigadier general; the Marine Corps was the last of the branches to appoint a female flag officer. In May of 1978, she became the first female general officer in the Marine Corps and in 1979, she became the director of Public Affairs until her retirement in July of 1980.