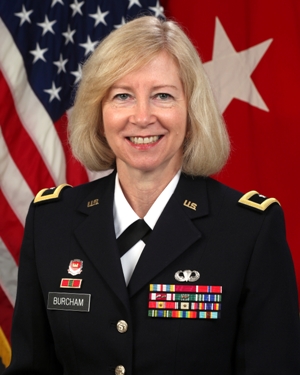 Burcham has a Masters degree in Computer Science from Kansas State University. She took the Engineer Officer Basic and Advanced Courses, studied at the Combined Arms Services Staff School, the United States Army Command and General Staff College, the Senior Service College, and the Industrial College of the Armed Forces.

Burcham has had several positions during her service such as Chief of the Joint Capabilities Division of the Resources, Assessments and Force Management Directorate at the Pentagon, and Commander of the USACE North Engineer District in Iraq and the Europe Engineer District.

Then on January 27, 2012, she was promoted to Brigadier General at the USACE headquarters in Washington and became the first female General of the USACE. She was appointed to the Mississippi River Commission on May 28, 2013 by President Barack Obama.

Burcham was appointed Director of Manpower and Personnel for the Joint Chiefs of Staff by June 2015. She retired from active duty in August 2016.