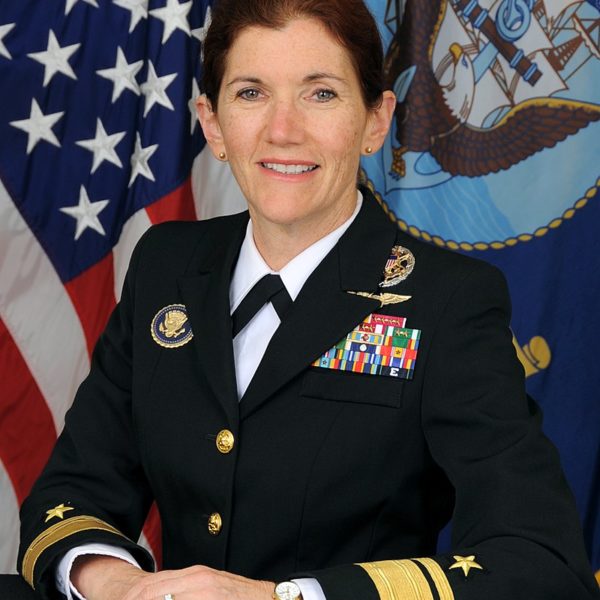 Margaret DeLuca “Peg” Klein was commissioned in 1981 upon graduation from the United States Naval Academy with a Bachelor’s degree. She later earned a Master’s of Education from the University of Southern Maine in 1999.

In 1983, Klein was designated a naval flight officer with the “Ironmen” of Fleet Air Reconnaissance Squandron (VQ) 3. While there she qualified as mission commander and airborne communications officer in the EC-130Q.

In 1987, she reported to the Staff of Commander, Naval Air Forces, United States Atlantic Fleet, where she was responsible for ensuring enlisted personnel readiness. In 1988, Klein transferred to the Naval Military Personnel Command, where she served as aviation initial assignments officer and VQ detailer.

In 1999, Klein returned to the Ironmen for a third tour to serve as Executive Officer and Commanding Officer. During her command tour, the Ironmen won the Battle E and the Maintenance Excellence Award. After leaving squadron command, Klein served aboard USS Kitty Hawk Battle Group Staff as the N6. During her tour on the Carrier Group Five staff, the Battle Group participated in Operation Enduring Freedom and in Operation Iraqi Freedom.

Klein returned to Oklahoma to serve as Deputy, then Wing Commander of Task Force 124 and Strategic Communications Wing One. Upon completion of Major Command, she was assigned to the Staff of Commander, Carrier Strike Group Eight where she served as the Chief of Staff for the Eisenhower Strike Group until her selection as the 82nd Commandant of Midshipmen at the United States Naval Academy. The first woman to ever hold that position.

Secretary of Defense Chuck Hagel on March 27, 2014 announced that Klein would “serve as … Senior Advisor for Military Professionalism, reporting directly to [Hagel] on issues related to military ethics, character, and leadership … Rear Admiral Klein will coordinate the actions of the Joint Staff, the Combatant Commands, and each of the military services – working directly with the Service Secretaries and the Service Chiefs – on DoD’s focus on ethics, character, and competence in all activities at every level of command with an uncompromising culture of accountability. This will continue to be a top priority for DoD’s senior leadership.”