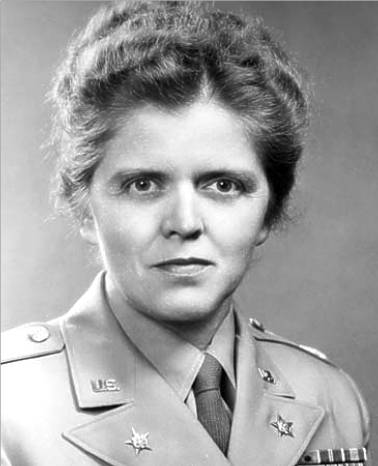 In 1942, during WWII, Mary Hallaren became one of the first women volunteers to be selected for Officer Candidate School in the Women’s Army Auxiliary Corps (WAAC), later named Women’s Amy Corps (WAC).

Shortly after graduating, she put on the rank of captain and was appointed as commanding officer of the the 1st WAAC Separate Battalion and led the first woman battalion overseas to the European Theater of Operations.

Colonel Hallaren served as director of all WAC personnel in the European Theatre. In that position, she had made the rank of lieutenant colonel and oversaw 9,000 WACs in England, France, Germany, Austria and Belgium.

Colonel Hallaren retired from the Army in 1960. She was reported to be one of the most beloved members of the WAC with the nickname of “Little Colonel” due to her height of 4’ 10”. However, her exemplary leadership and positive impact on women in the military was anything but little.

In 1965, Mary Hallaren became director of the Women in Community Service division of the U.S. Labor Department. After retirement she still engaged in civic affairs, serving on the board of directors of the WAC Foundation and lecturing on the history of women in the army. She was inducted into the National Women’s Hall of Fame in 1996.