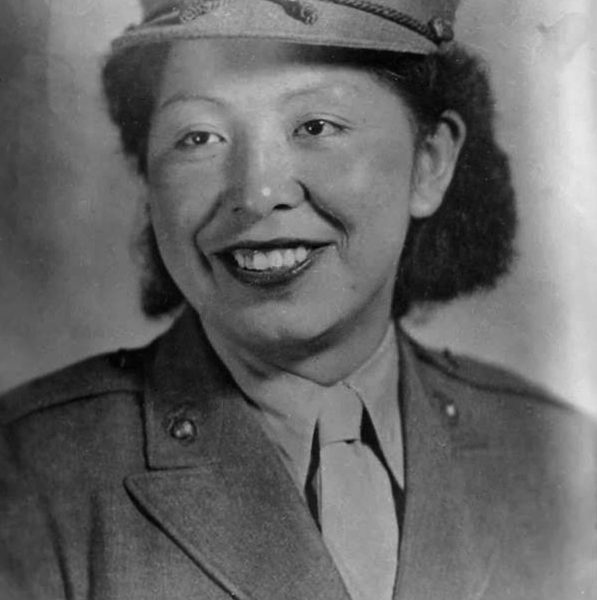 Minnie Spotted-Wolf was born in 1923, near Heart Butte, Montana and a member of the Blackfoot tribe. She use to work on her father’s ranch doing such chores as cutting fence posts, driving a two-ton truck, and breaking horses, which she believed prepared her for the rigorous Marine Corps boot camp.

Spotted-Wolf enlisted in the Marine Corps Women’s Reserve in July 1943. She initially encountered resistance because she was a woman, but eventually she was accepted

She served on military bases in California and Hawaii. She worked as a heavy equipment operator and a driver for general officers.

Spotted-Wolf’s skills and pioneering status earned her press coverage which included headlines like Minnie, Pride of the Marines, Is Bronc-Busting Indian Queen.

She was discharged in 1947 and returned to Montana. After her military service, Spotted-Wolf married a farmer named Robert England and attended college earning a degree in Elementary Education and spent 29 years as a teacher.

According to her daughter, “she could outride guys into her early 50s.”

Minnie Spotted Wolf passed away in 1988 at the age of 65. She was buried in her military uniform.

In August 2019, a section of U.S. Highway 89 was dedicated as “Minnie Spotted-Wolf Memorial Highway. Many people including her family and members of the Blackfoot Tribe attended the ceremony.