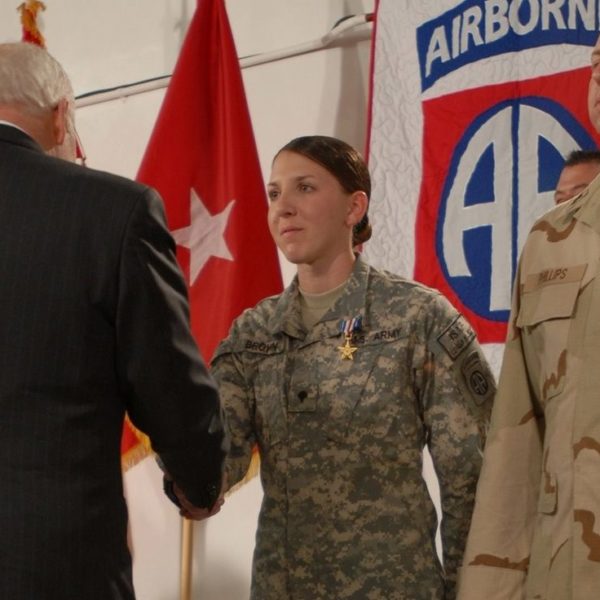 Monica Lin Brown was born on May 24, 1988 in Lake Jackson, Texas. She joined the United States Army at the age of 17. She became a Combat Medic and has risen to the rank of Sergeant.

On April 25, 2007, Brown was serving as a Combat Medic with the 4th Squadron, 73d Cavalry Regiment, 4th Brigade Combat Team, 82nd Airborne Division in Afghanistan. Brown was on a combat patrol when one of the vehicles in her convoy was struck with a pressure plate IED, engulfing the vehicle in an intense fireball. The convoy was ambushed and began taking fire. Brown moved on foot to evaluate the casualties. After assessing the injuries, she moved them to a safer position. The enemy fighters began engaging the patrol with mortar rounds. Brown then used her own body to shield the casualties from large chunks of shrapnel. The platoon sergeant used the ANA Ranger to move the wounded and Brown to a safer position. Not soon after did a large mortar explosion send shrapnel flying in the location Brown had been treating the casualties. Once moved, it wasn’t long until their new position came under small arms fire, however, Brown did not stop treating the wounded and protected them using her own body as a shield. She made sure to help her fellow soldiers, stabilize, and prepare them for MEDEVAC.

The patrol leader found it incredible she was still alive and treating the casualties amidst the extremely dangerous conditions she was operating under. Despite her heroic actions, Brown didn’t want to leave, but she was pulled from the field only days later because her presence had attracted attention and there were many issues regarding women in combat roles.

For her actions, Brown was awarded the Silver Star, the United States military’s third-highest medal for valor in combat. Brown became the first woman during the War in Afghanistan and only the second woman since World War II to receive the Silver Star. She was presented with the Silver Star by Vice President Dick Cheney in a ceremony on March 21, 2008.