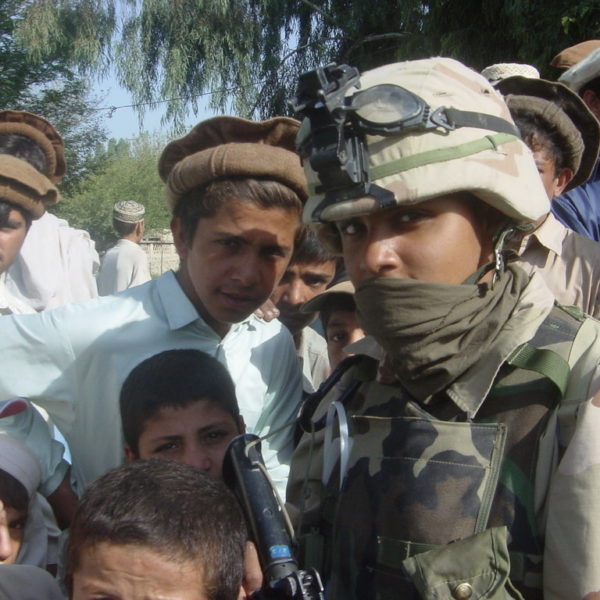 Born and raised in Ipswich, England with an English mother and American father, Nicola Hall was a natural born Athlete with a sense of dual nationality. Her father was an Olympic athlete – and at just 10 years old, she started competition track. By the age of 15, she was the fastest hurdler in England, and represented England in international track events. She was also the only female on her school’s football team.

When she was 16, her family moved to Georgia. She received a track scholarship and went off to college, only to find that her passion did not lie there at the time. She then felt compelled to join the Army and enlisted in 2000.

Hall was assigned to the 21st Military Police Company (Airborne). On her first deployment, in Kosovo, she earned soldier of the quarter and earned her promotion to corporal. Soon after, 9/11 occurred and she found that her patriotism for America was confirmed stronger than ever.

In early 2002, she deployed to Kandahar, Afghanistan with her company. However, the infantry units were facing issues running combat patrol missions due to the local women hiding intelligence, weapons and high-value targets. It would have been cultural warfare for the male infantrymen to search these women. Therefore, they needed a female to aid in combat patrols and missions with them – and she was selected. She was so successful in finding weapons and other items hidden on the local women that the infantry unit she was working with requested that her company release her to continue combat patrol missions across the country. She was then deployed to Forward Operating Base Salerno which was in the southeastern province of Khost, Afghanistan.

Hall reported in an interview that the infantrymen of her new unit were skeptical about bringing on a female. However, it was only a short time before they became comfortable and established trust in her. The company commander even relinquished worry once they saw how capable and how much of an asset a woman could be for the team. Because she was so successful in her missions, she drew much attention from the local nationals. As a result, and for her safety, she had to keep her face covered and essentially wear blank uniforms to hide any identifying markers such as her name and rank on her uniform while running these missions. One woman she was inspecting had a hand grenade on her, in which Hall swiftly disarmed her as she was about to pull the pin, saving 15-20 people who would have been in the blast radius.

Shortly after returning to her Police company, she found herself deploying with American and Canadian Special Forces to run similar missions. In 2003, she arrived at her new unit in Korea. She couldn’t help noticing that the soldiers in her unit were rather inexperienced and underprepared for where they would be deploying– Iraq. She then brought it to her company commander’s attention and requested to become the training NCO to prepare these soldiers for what they were about to experience. She wanted to train them for new urban environments with live fire and various heightened risks.

Speaking on behalf of women service members, Hall illuminates that, “there is no decrement in our readiness and lethalness”. During her time, women were not officially permitted to serve in combat roles, yet her performance in an all-male combat unit in the early days of the war in Afghanistan exemplified that women are capable and valuable in combat operations. Since female combat roles weren’t available for her to pursue in 2005, she decided to take the experiences and knowledge she gained and leave the service. She now helps female veterans in their transition and provides connection to VA services as well as other resources available to them.