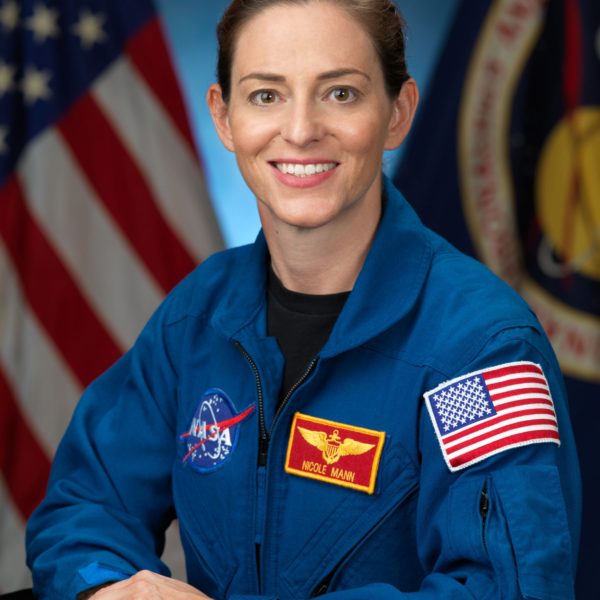 Nicole Victoria Aunapu Mann was born on June 27, 1977 to Howard and Victoria Aunapu and grew up in Penngrove, California. In 1995, she graduated from Rancho Cotate High School in Rohnert Park, California. After graduating from college in 1999 with a Bachelor’s in Mechanical Engineering, Mann attended the US Naval Academy. After commissioning in the U.S. Marine Corps, she attended graduate school at Stanford University, where she received a Master’s in Mechanical Engineering, Specializing in Fluid Mechanics.

After completing graduate school, Mann attended The Basic School and began flight training at NAS Pensacola. She was awarded her Naval Aviator wings in 2002 and completed training for the F/A-18 Hornet in VFA-106 at NAS Oceana. Mann joined VMFA-251 at MCAS Beaufort and deployed twice on the USS Enterprise with CVW-1 in support of Operation Iraqi Freedom and Operation Enduring Freedom. She was a member of Class 135 at the US Naval Test Pilot School and served as an F/A-18 Test Pilot in VX-23 at NAS Patuxent River. She has over 2,500 flight hours in 25 types of aircraft, 200 carrier landings, and has flown 47 combat missions in Iraq and Afghanistan. At the time of her selection as an astronaut candidate, she was Joint Mission Planning System Expeditionary Integrated Product Team Lead at PMA-281.

In 2013, Mann was selected as one of the eight members of NASA Astronaut Group 21. She completed her training in 2015 and has since served as a T-38 Talon Safety and Training Officer and was the Assistant to the Chief of Exploration. She worked on development of the Orion spacecraft, Space Launch System, and the Exploration Ground Systems. In August 2018, she was assigned to Boe-CFT, the first crewed test flight of the Boeing CST-100 Starliner.

As a student at the Naval Academy, Mann played soccer and was an Academic All American. She was a Trident Scholar and a Distinguished Graduate. During her military career, she received two Air Medals, two Navy and Marine Corps Commendation Medals, and two Navy and Marine Corps Achievement Medals. She was the Honor Graduate in her US Naval Test Pilot School class. She received the NASA 2015 Stephen D. Thorne Safety Award and the 2017 Jerry Yeagley Award for Exceptional Personal Achievement. Mann is a member of the Society of Experimental Test Pilots, Tailhook Association, US Naval Test Pilot School Alumni Association, United States Naval Academy Alumni Association, received the Leroy Grumman “Best Paper” Award at the East Coast Society of Experimental Test Pilots Symposium.