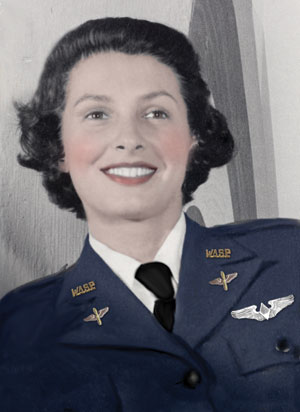 Ola Mildred Rexroat was born in Ogden, Kansas on August 28, 1917, to a white father and an Oglala mother. The family moved to South Dakota when she was young and she spent some time on the Pine Ridge Reservation. She attended public school in Oklahoma and graduated from the St. Mary’s Episcopal Indian School in South Dakota, in 1932. Rexroat initially enrolled in a teachers college in Chadron, Nebraska, but left before completing her degree to work for what is now the Bureau of Indian Affairs for a year. She earned a Bachelor’s degree in Art from the University of New Mexico in 1939. After college, she returned to the Bureau of Indian Affairs in Gallup, New Mexico for a year.

Rexroat worked on an airfield when she decided to learn how to fly to take part in the war effort. In order to learn to fly she joined WASPs. After choosing to join, she moved to Washington, D.C. with her mother and sisters. She was employed at the Army War College. Rexroat then went to Texas for WASP training. After her graduation she was assigned the dangerous job of towing targets for aerial gunnery students and helped transport cargo and personnel at Eagle Pass Army Airfield. Rexroat goes by “Millie” was known as “Rexy,” or “Sexy Rexy,” by her fellow WASPs. As World War II ended in 1944 the WASPs were disbanded, so Rexroat joined the Air Force. She served for ten years as an Air Traffic Controller at Kirkland Air Force Base in New Mexico during the Korean War and after her time in the Air Force Reserves she moved onto the Federal Aviation Administration for 33 years.

Rexroat said of her service, “I just did what I was expected to do and tried to do it the best way I could…If I did accomplish anything or add anything to the war effort, I am happy now, and I was happy at the time.”

It wasn’t until 1977, when President Jimmy Carter signed a bill making them a part of the Air Force that the WASPs were recognized as veterans. The bill would allow WASPs to receive the right to be buried with a flag, buried in a military cemetery and gain access to U.S. Department of Veterans Affairs hospitals.

In 2007 she was inducted into the South Dakota Aviation Hall of Fame.

Rexroat was the last surviving WASP in South Dakota until her death in June 28, 2017 at the age of 99. At the time she was one of 275 living WASPs out of the original 1,074. Several months after her death, Ellsworth Air Force Base named the airfield operations building after her.