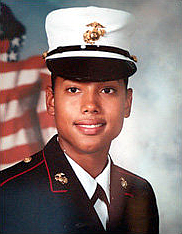 A young woman inspired by duty to her family and country, Corporal Ramona M. Valdez served during Operation Iraqi Freedom in the United States Marine Corps.

Valdez was born in the Dominican Republic and grew up in New York. During her teens she got her first job working at the Statue of Liberty and when she was 17 she received permission from her mother to enlist in the U.S. Marine Corps.

Valdez served as a communications specialists and was later deployed to Iraq. On June 23, 2005, days before her 21st birthday, Valdez was in a convoy that was ambushed by a suicide bomber. Many troops, including Valdez did not survive.

She was awarded full military honors and the U.S. Marine Corps honored her by dedicating the II MEF Communications Training Center as the Valdez Training Facility.