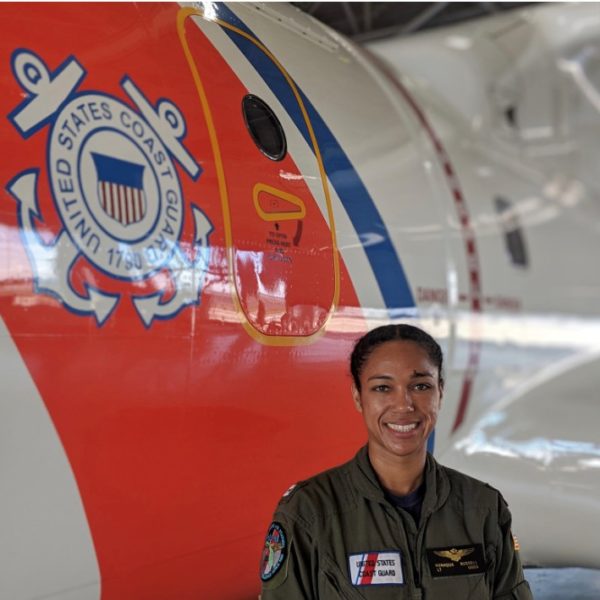 Lt. Ronaqua Russell is a native of St. Thomas, U.S. Virgin Islands and a 2012 Coast Guard Academy graduate. She’s also a member of the “Fab 5,” a group representing the only five African American female pilots in all of Coast Guard History– and she continued to make history by being awarded the Air Medal in 2019.

During hurricane Harvey, Lt. Russell’s HC-144 Ocean Sentry aircraft was the first in the air following the Category 4 storm, hitting tropical storm force winds, zero visibility conditions and piloting landings onto partially flooded runways. Her and her crew delivered supplies and support personnel for the ongoing rescue and port recovery efforts. Lt. Russell also flew damage assessments and assisted on ground by then serving at the Incident Command Post for the Corpus Christi area.

A few days later, the Virgin Islands were hit with hurricane Irma, a category 5 storm. Lt. Russell’s family was unable to evacuate and lost communications but thankfully were safe taking shelter in their homes. Shortly after another storm, Hurricane Maria, began developing and again, Lt. Russell was called to assist evacuations and deliver supplies.

Due to her admirable and heroic actions during these times of natural disaster, she became the first African-American female aviator in the Coast Guard to receive the Air Medal. The ceremonies to honor her achievement, reported by the Maritime Executive, took place at Tuskegee’s Moton Field, the location where the first African-American aviators in the U.S. military not only won the fight on racial inequalities to earn their wings, but also went on to fly heroic combat missions in WWII.