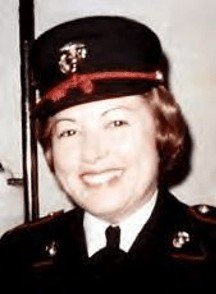 Rose Franco was born on January 22, 1934 in the Puerto Rico. She initially pursued business administration when she attended college, but when the Korean War began, Franco decided to change course by leaving college and joining the United States Marine Corps. Coming from a traditional family, they protested against Franco’s decision, but Franco believed it was her patriotic duty to serve.

Franco completed her four year enlistment in 1956 and returned to Puerto Rico to work for Pan American Airlines. However she decided to re-enlist in the Marine Corps. Her new assignment took her to Garden City, Long Island, New York to the First Marine Corps District. After two years, she was assigned as an Administrator at the Marine Corps Recruit Depot Parris Island in South Carolina.

In 1965, Franco became the Administrative Assistant to the Secretary of the Navy, Paul Henry Nitze by the administration of President Lyndon B. Johnson. She was promoted to the rank of Warrant Officer by the recommendation of the Secretary of the Navy.  She reported to work in The Pentagon, holding several important positions during her time in Washington, D.C.. At that time, she was only one of 11 women Warrant Officers in the Marine Corps.

Franco retired from the Marine Corps in 1977 with the rank of Chief Warrant Officer 3 and returned to Puerto Rico where she currently lives.