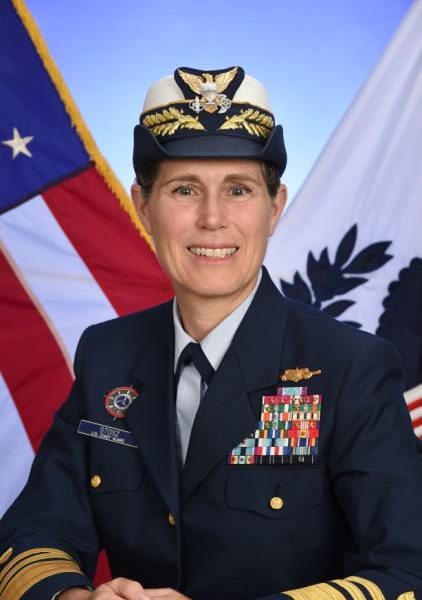 Sandra Stosz was born to parents who were chemical engineers, Max and Joy Stosz in 1960 in Maryland. There she exceled as the discus state champion and as a Junior Olympic caliber swimmer. She moved on to New London, Connecticut to join the United States Coast Guard Academy.

At the continued to pursue in her interest in swimming at the Academy, as she competed for Coast Guard’s sailing team and for the men’s swimming team before women’s sports were introduced. Stosz is the first female graduate of the Coast Guard Academy to achieve flag rank.

In 1990, as a Coast Guard lieutenant, Stosz became the first woman to command the USCGC Katmai Bay (WTGB 101), a Coast Guard cutter in the Great Lakes with a crew of 17 (3 officers and 14 enlisted, while also serving as the Commanding Officer of United States Coast Guard Training Center Cape May, New Jersey. As a leader in the Coast Guard Reserve, she made plans in 2011 to raise the Coast Guard Reserve to 8,100 personnel from the 7,600 reservists available in 2010 to deal with the insufficient amount of reserve personnel available to support the active duty contingent, that they experienced with the Deepwater Horizon Oil Spill. In 2012

In 2014, Stosz continued to serve as an Admiral although many USCGA Superintendents retired upon their term completion. On May 31, 2015 Stosz was “frocked” in a ceremony and confirmed as Vice Admiral by the U.S. Senate. Her time at the Academy came to end the next day on June 1, 2015 when she was relieved by Rear Admiral James Rendon during a Change of Command ceremony supervised by Commandant of the United States Coast Guard, Vice Admiral Peter V. Neffenger. After, she served in Washington as Deputy Commandant for Mission Support until relieved by Vice Adm. Michael F. McAllister on 25 May 2018.