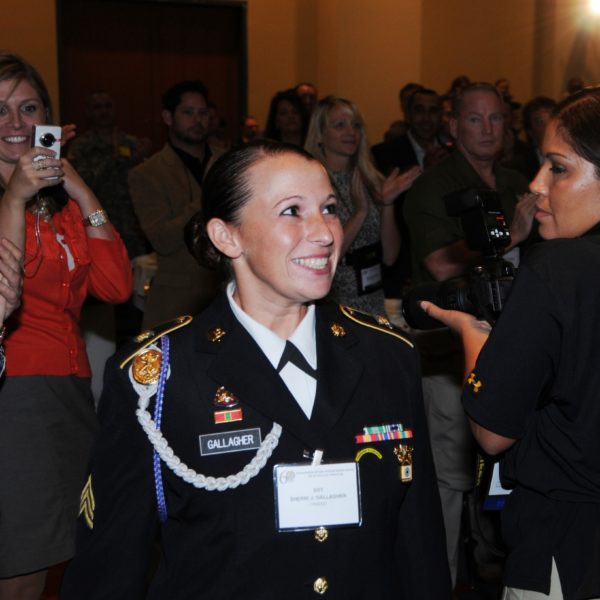 Sherri Gallagher was born in 1984 in California. Gallagher was born into a family of expert shooters. Her mother, Nancy Tompkins, made history in 1998 as the first woman to win the High Power Rifle Championship. Her stepfather, Mid Tompkins, won the honor six times in a row. Her step-cousin half removed, Patrick Kelly, is a clay pigeon shooter. At just 5 years old Gallagher began learning how to shoot a rifle. She spent her childhood summers touring shooting competitions with her parents and now participates in the World Championships every four years.

Gallagher had a lengthy resume of wins in rifle competitions. In 2003 Gallagher became the World Long Range Shooting Champion and had been named National Rifle Champion twice by the National Rifle Association.

Following her awards, Gallagher was invited to guest jump with the U.S. Army’s Golden Knights Parachute Team. Following the jump, the team invited Gallagher to enlist.

Sherri Jo enlisted in 2008 and attended Basic Training at Ft Leonard Wood. Immediately after, she attended her Advanced Individual Training as a truck driver, also at Ft. Leonard Wood.

In August 2010, Gallagher was the second woman to win the NRA’s National High Power Rifle Championship. The first woman in history had been her mother. Of the twelve awards available at the 2010 NRA Championships, Gallagher was given eight.

Throughout her career, she was stationed in Ft. Benning, GA where she served as a shooter competitor/ instructor on the Army Marksmanship Unit where she competed in a number of World Championships and National Championships. She also instructed Squad Designated Marksmanship classes for Soldiers in Long Range rifle engagements. In 2010, she competed and won the Army Soldier of the Year Competition. In October 2010, Gallagher studied at the Airborne School in Fort Benning, Georgia, and took the Warriors Leaders Course.

She remained with the USAMU for five years until her assignment to the U.S. Army Parachute Team in 2012.

SSG Gallagher has had one tour in Afghanistan where she trained female Afghanistan officers in basic marksmanship. She has been awarded the President’s Hundred Tab, Basic Airborne Wings, one Meritorious Service Medal, two Army Commendation Medals, and four Army Achievement Medals.

Since learning to skydive in 2012, she has logged over 1,500 free fall parachute jumps and five military static line jumps. In her free time she enjoys flying in the Vertical Wind Tunnel, long range rifle competition, theater and literature, crossfit training and yoga.

In 2013, Gallagher was profiled by Business Insider as one of the “Most Impressive Women in the U.S. Military”.

As of July 2014, Gallagher is stationed in Arizona.