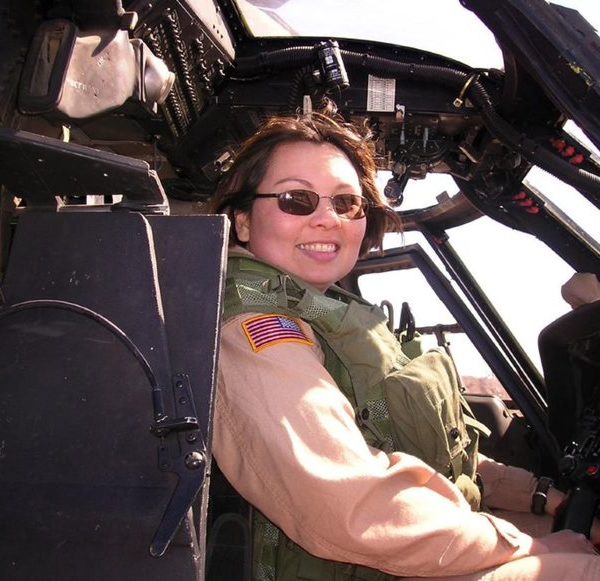 Following her family traditions, Ladda Tammy Duckworth joined the Army Reserve Officers’ Training Corps in 1990 as a graduate student at George Washington University and later became a commissioned officer in the United States Army Reserve in 1992.

Choosing to fly helicopters, as it was one of the few combat jobs open to women, she became a UH-60 Black Hawk helicopter pilot. She later transferred to the Illinois Army National Guard in 1996 and then found herself deploying to fly Operation Iraqi Freedom combat missions.

During the Iraq War, in 2004, Lt. Col Duckworth’s helicopter was stuck by a rocket propelled grenade. She thankfully survived the crash but suffered from severe combat wounds, losing both of her legs and damaging her right arm.

Despite this, she continued to serve as a Lieutenant Colonel in the Illinois Army National Guard until she retired from the Army in October 2014.

In 2012, Tammy was elected to Congress, representing Illinois’ 8th District, and in 2016, was elected a U.S. senator. This made her the first disabled woman and only the second Asian-American woman in the Senate. In April 2018, Duckworth also became the first female senator to give birth while holding office.

As the director of the Illinois Department of Veterans’ Affairs, Duckworth worked toward developing an incentive program that would give employers a tax credit for hiring war veterans, as well as programs providing veterans and their families with better mental care, health care and housing resources.

As the assistant secretary for public and intergovernmental affairs in the U.S. Department of Veterans Affairs, focused on putting a stop to the cycle of homeless veterans and developed resources tailored towards female veterans.

“I was hurt in service for my country. I was proud to go. It was my duty as a soldier to go. And I would go tomorrow.” –Ladda Tammy Duckworth