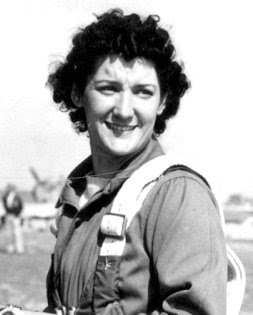 James was initially afraid of flying, after seeing a plane wreck the year before she started flying and shortly after, her brother, Francis, had also nearly died in a plane crash. Despite her fear, she learned to fly at age 19 so that she could impress a handsome pilot that she had a crush on. James learned to fly with a friend, Harry Fogle, in an OX-5 powered Travel Air 2000 and began working as a stunt pilot with Fogle and his friends. In her stunt debut, she made $50 and performed an aerial spin of 12 1/2 rotations as she dove. She and Fogle were billed as the “Girl Stunt Pilot” and “The Flying Iceman.” Her signature stunt move was a 26-turn spin. After being “practically dared” James also started ice skating becoming a speed skater and competing in the Pennsylvania Skating Association’s championship meet in 1939.

James went on to earn a commercial license in 1941 and became a flight instructor. James was the first woman flight instructor to graduate from the Buffalo Aeronautical Institute. In 1942, she married George “Dink” Martin and months later she was invited to join the Women’s Auxiliary Ferrying Squadron (WAFS). James received a telegram on September 9, 1942, requesting that she report to the New Castle Army Air Base. James’ husband was also called to the war effort and was sent overseas to work as a bomber pilot. On June 22, 1944, he was killed during a mission flying near Paris.

James passed her flying and physical tests for the WAFS and was sworn in on October 6, 1942. In 1944, Teresa had to be tested in the P-47 Thunderbolt, a 2,800-HP fighter-bomber. “The male pilots told me that it was a hard airplane to fly…never having flown a plane with that kind of horsepower in a single-seat pursuit aircraft, that it would be hard to handle. I don’t know what they meant by that. I think that half of Washington, D.C., was up there to see if I was going to splatter myself all over the runway. To me, it flew like a little old Cub.” James was one of the first women in the WAFS and was assigned the first long-distance solo mission. The mission was to ferry a PT-19 from Maryland to California. James stayed with the WAFS as they were merged to form the Women Airforce Service Pilots (WASP) and until the organization was disbanded on December 20, 1944. After WASP was discontinued, James returned to Pittsburgh and found that there was a lack of opportunities for female pilots. Like other WASPs, she didn’t get credit for her service as a pilot between 1942 and 1944. James wrote to Congress, requesting veterans’ status for the WASP and would continue to fight for the WASP to be recognized with veteran status.

In 1950, she became a commissioned Major in the United States Air Force Reserves. Between 1961 and 1965, she was stationed at Elmendorf Air Force Base as part of the 5040th Air Base Group. In 1976, she retired from the Air Force and moved to Lake Worth in 1979 to be closer to her parents.

In 1992, a biography about James, called On Wings to War: Teresa James, Aviator and written by Jan Churchill was published, giving a “personal ‘view from the cockpit’ account of James’ time as a WASP.

James stayed active with flying groups during her retirement. She was a member of the Ninety Nines, and the P-47 Thunderbolt Pilots Association. When the Grumman corporation heard her say in a CBS documentary about the Air Force, Top Flight, that the only thing she hadn’t flown was a jet, the company arranged for her to fly an F-14. She was still flying at age 86 in 1997.

On July 26, 2008, James passed away while in hospice. Her remains were cremated and interred in Pittsburgh. James’ WAFS uniform is in the collection of the Smithsonian Air and Space Museum.