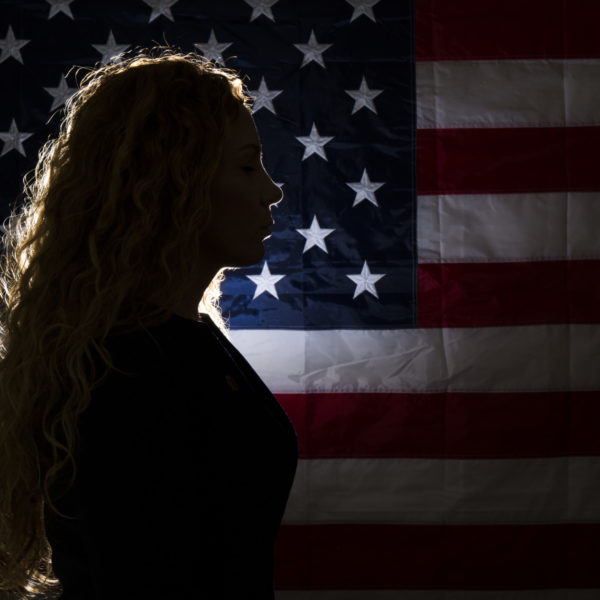 Stationed at a table in the corner of a small bakery, ringlets of reddish curls spilled over a white ruffled blouse tucked under a crisp dark blue business jacket. Eyes glued to an iPhone, a slender finger scroll through pages of a digital report stopping every few lines, committing the information to memory in preparation for a speaking engagement.

The panicked feeling of an adrenaline rush before stepping onto a podium is meek in comparison to the two tours in Iraq Jodie Grenier served while on active duty in the the U.S. Marine Corps as an intelligence analyst.

As the executive director of the Foundation for Women Warriors (FWW), Greiner’s mission is to empower women veterans who are either on active duty or are transitioning out of the military.

“When you are in the service you serve with so very few women that when you get out of the service, organizations remain male dominated in the same way the service was. It can feel pretty lonely if you are transitioning by yourself,” Grenier said.

Grenier grew up with a single mother and two younger sisters. The opportunity for a college education wasn’t easily attainable so she turned to the military as a way to reach for success.

“I joined the Marine Corps in 2000,” Grenier said. “Once 9/11 happened, that sent a shock throughout the military and the intelligence community.”

Grenier was queued for deployment soon after. During her first few days in Kuwait, Grenier remembers a senior officer asking all the soldiers to write a letter home in case they did not make it back.

“I didn’t necessarily think I was going to die right then,” Grenier said. “That was a very sobering task at 20 years old to write a letter home with the thought that you might not return.”

Grenier wrote the letter with her family in mind. She wanted them to know that they were capable and could be anything.

“I used to fly, frequently, from Ramadi to Al Asad and then to the Syrian border,” Grenier  said. “A lot of times I thought ‘I wish someone could record this and play it to my family.’ Because they never would have a clue that this is my life.”

After her active duty service, Grenier became in charge of the FWW, one of the only organizations in Southern California that specifically strives to help women veterans with the issues they face.

One of the biggest struggles that women in the military encounter is having childcare while they are at school furthering their education after their service, according to Grenier.

“A lot of times, child care is significantly reduced while you are in service,” Grenier said. “But when you get out of the service the price increases drastically and that becomes a burden.”

The FWW also provides financial assistance to veterans who are actively working to better their lives by working on their career or pursuing a higher education.

“Anyone in the country can call and we can connect them with the resource they need. Whether or not it is healthcare or childcare. We work with over 800 partners to do that,” Grenier said.

Juliana Mercer, a friend and colleague of Grenier’s, often collaborates with FWW on similar issues.

“Males also need housing assistance and assistance with child care,” Mercer said. “But, women’s needs are just a little bit different. Being able to focus on those needs specifically is really important because we are unique.”

According to the U.S. Department of Veterans Affairs, the unemployment rate of female veterans is 5.4 percent, compared to the to 4.5 percent for male veteran unemployment.

“[For example,] single parents. The moms end up with the kids and she can’t go to school because she is focusing on childcare. There is also, just in the general population, the glass ceiling,” Mercer said.

There is also the issue of equal pay for women in the workforce after one’s service in the military has ended.

“That is another issue for all women, but that is an issue that affects and impacts female veterans more than it does with the general population because of their experience translating from military to civilian,” Mercer said.

When Grenier was transitioning out of the Marine Corps, she sometimes felt left out of the conversation because the majority of veterans are male.

“No one knew that I was a veteran unless I said it,” Grenier said. “ I think the struggle, more or less, was not so much me not being recognized. It was me figuring out the lack of opportunity. My mentors on the outside were non-existent.”

Women were not allowed to serve in the military as anything but nurses until World War II. However, even then, they were only granted permission to serve in noncombat roles, according to the Williamsburg Foundation.

It wasn’t until 1991 that women were granted full operation rights in combat zones.

“I think women have served in the military and have been grateful for the opportunity to serve and that has stifled our progress in terms of capturing our history and really celebrating our accomplishments,” Grenier said.

When she enlisted in 1976, a woman’s role in the military was to free men to fight in the war by taking non-combat positions, according to Keller. However, in 1978, women had an obligation to fight.

“The changes that have happened from that period of time to today are phenomenal,” Keller said. “The last hold out are the SEAL teams.”

Women were barred from applying to serve in the Special Warfare Combatant-Craft Crewman Program and the Navy SEAL teams until January of 2016. After applications were open to females for 18 months, two women submitted their paperwork for eligibility.

However, their names were not released to the public for fear that their personal security and future career viability would be put into jeopardy, according to a 2017 article by CNN.

So far, all graduating SEAL teams have been men.

“There was a time, and it still exists today, when all women have to try just a little bit harder to excel and make sure that they are a contributor. There are still people in the services who would rather not have women in every facet of the service,” Keller said.

Because so few women serve in each division of the military, standing out against one’s fellow soldiers is unavoidable, according to Keller.

“One of the most difficult things was the ridicule and questioning you get when you are the only women in a 385 person squadron, it’s extensive,” Keller said. “You have to shine your shoes better, shoot better, run better. You are already at a minus five when you step in and that has been changing a great deal.”

Keller believes that people shouldn’t look at the problems with the military and think that the root of those problems stem from the military.

“The service is a reflection of our society. We still have sexual harassment. Women are working through that. They are keeping their eye on the ball and holding their heads up,” Keller said.

There is a large disconnect between women’s history and society, especially in the military, according to Grenier.

“There was no, ‘Oh, I want to be like her when I grow up. So, I am going to be a Marine,” Grenier said. “When we think about women who have blazed the trail, you never hear about a woman like Admiral [Grace] Hopper. You never hear them as being role models.”

Josie Grenier, Jodie’s sister, joined the United States Air Force after deciding that community college was not for her. She served six years and traveled between air bases in Las Vegas, Iraq, Korea and Tokyo, where she currently lives.

“Jodie had played a major influence [in my joining the military] because she was doing great,” Josie Grenier. “It’s one thing to be successful in your own life, but then to ensure that the other people around you will be just as successful is beyond words. It’s something that I never thought I would see coming from her or anyone in our family.”

People must start looking at the military as a reflection of society. The sooner society begins to do away with certain stigmas about females in the military, the sooner things will begin to change, Jodie Grenier said.

“I think that women who have served or challenged the status quo should really brag about themselves and that will be a source of inspiration for younger women to serve in our military,” Jodie Grenier said.  “The more women we have in the military beside our brothers, the more cohesive and less unfamiliar that territory will be.”