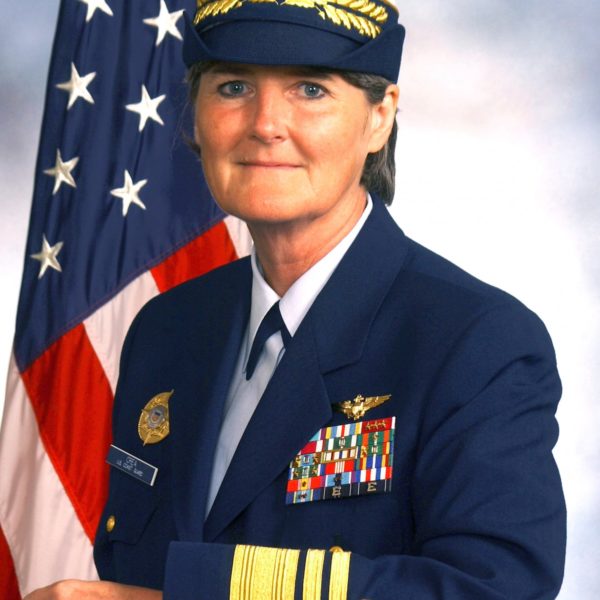 Vivien Crea born in 1952, earned a Master’s degree from the Massachusetts Institute of Technology and from Central Michigan University. She also has a Bachelor’s degree from the University of Texas. Crea was commissioned an Ensign in the Coast Guard Reserve upon graduation from Officer Candidate School (OCS) at Reserve Training Center, Yorktown, Virginia in December 1973.

As Lieutenant Commander, she became the first woman from any service, as well as the first service member from the US Coast Guard to serve as the Presidential Military Aide, where she carried the nuclear football for President Ronald Reagan for three years.

Crea assumed command of Coast Guard Atlantic Area on July 16, 2004. This post is the operational commander for all Coast Guard activities in an area of responsibility spanning five Coast Guard Districts, over 14 million square miles covering the Eastern and Midwestern United States from the Rocky Mountains to Maine and Mexico, out across the Atlantic and through the Caribbean Sea, involving over 33,000 military and civilian employees, and 30,000 auxiliarists. She served concurrently as Commander, Coast Guard Defense Force East.

An aviator, Crea became the first female awarded the honorary title of Ancient Albatross, a role she held until her retirement in 2009.

In 2010, she became the first Coast Guard aviator to be inducted into the Women in Aviation International Pioneer Hall of Fame.

Her personal awards include the Defense Superior Service Medal, the Legion of Merit (four awards), and the Meritorious Service Medal.