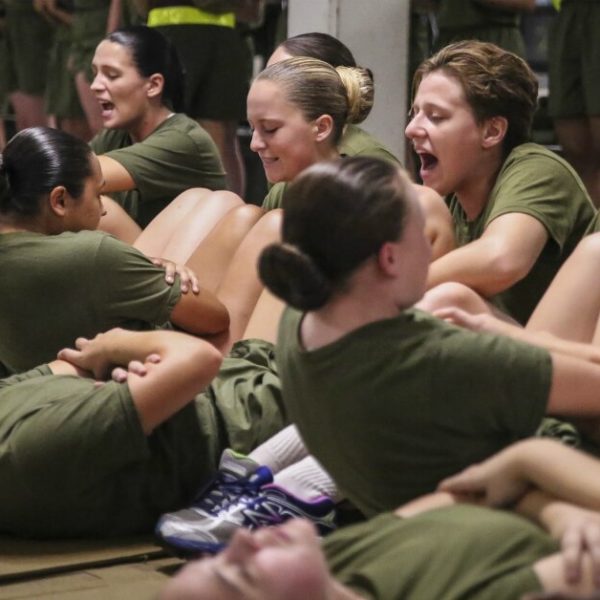 When she left the military in 2005, Jodie M. Grenier went from being on a team of intelligence analysts reporting to then-Marine Corps Gen. Jim Mattis, with a top security clearance, to waiting tables.

“It was frustrating. I had a very purpose-driven job, and when I got out, I went to a community college and waited tables,” Grenier said.

Grenier participated in the transition classes offered by the military, but to her, they were ineffective and unhelpful. She searched job portals and worked as a bartender to support her education. Not having children afforded her flexibility that other women veterans might not have, she said.

Grenier is not alone. More than 30,000 women leave the military every year. There are 2 million women veterans in the U.S. and Puerto Rico, according to data from the Department of Veterans Affairs. By 2040, the VA expects women to make up 18 percent of the veteran population.

As more female troops transition from active duty to civilian life, they face unique challenges. Lack of a community of fellow female vets, lack of child care assistance for single mothers and financial instability due to lack of financial literacy are all issues women veterans face, experts say. While some of these challenges affect all veterans, the issues are compounded for women because of cultural stereotypes and the gender pay gap.

About 67 percent of women veterans find their financial transition from the military difficult, compared to 47 percent of men; and more women vets experience “loss of income” as a key transition challenge compared to male vets, according to Maureen Casey, CEO of the Institute for Veterans and Military Families at Syracuse University.

Women veterans also have different social and psychological experiences than women who are private citizens. When transitioning into society, these differences can upend the expectations people normally have about women.

Dawn Fitzgerald started serving in the Navy right after high school. She transitioned out of active duty in 1998, and worked her way up from a janitor at Merck to a senior specialist in that company’s supply chain division in West Point, Pennsylvania.

“When you have strong leadership skills, sometimes, people don’t like that,” Fitzgerald, 44, said. “I have been told many times that I am intimidating.”

The military encourages a direct communication style that many civilian workplaces might not understand, according to Kayla Williams, senior director at the Center for a New American Security. Many veterans talk about the need to change their communication style when they become civilians; the societal penalty for directness is higher for women than men, experts say.

“Women can pay a higher penalty for not conforming to some of those expectations,” Williams said. “It is a jarring transition and can take some real recalibration of your presentation style if you are coming into a significantly different work environment.”

Fitzgerald, on the other hand, uses her “strong leadership” style to mentor younger women starting out by telling them it’s okay to be called “strong” and “assertive.”

“Women get called bitches when they are assertive and strong, but men are called leaders,” she says. “It’s hard.”

The Center for Women Veterans started offering exit seminars for women, but its main focus was making women veterans aware of health care resources. However, experts say that women veterans also need training on social and psychological skills to cope with the transitions. “It took the Army 17 years to get me to the rank of major, so there is no program that is going to be three to six months that is going to prepare me for civilian life,” Jas Boothe, who founded Final Salute Inc, said. “America needs to carry the torch, and go beyond the handshake and ‘thank you for your service.’ We need a boot camp that is longer and effective.”

More women vets are likely to be single parents than male veterans, experts say. In such a situation, planning for financial stability and housing becomes imperative.

Further, finding affordable child care while pursuing education becomes a major obstacle. “There are subsidized programs, but when you are working and in school, your income is just over the threshold, and it becomes an issue to get subsidized child care,” Grenier said. In California, the average weekly cost of care for an infant child is $211, compared to the subsidized rate of $60 a week for a single active duty E-4 at a Child Development Center on a base, according to Grenier .

Financial instability can be a major challenge post-service, Casey said. There is a lack of awareness in the women veteran community, and making them informed is also a challenge, she said. “The instructors in transition assistance don’t necessarily know all the services themselves,” Casey said. “The real opportunity is how do we create public-private partnerships, where agencies can come together to provide a complete picture of the opportunities available.”

A lack of a natural peer network where women can freely share their experiences leads to isolation during the transition. “Though the number of women veterans is increasing, there are still so few that they lack a natural peer support network, which can be an emotional challenge,” Grenier said. Grenier’s organization holds workshops to connect veterans with the community.

Here are a few of the organizations that help with the challenges mentioned above.

Connect with the community: The foundation provides one-day, professional development workshops that bring women veterans together with leaders in business and academia to teach about negotiating salary, self-branding, and creating a sense of community.

The programs have assisted women veterans and children in over 30 states and territories.

Institute for Veterans and Military Families

At Syracuse University, the IVMF works with communities and non-profits across the nation and has a variety of veteran programs.

This program run by Syracuse’s Institute for Veterans and Military Families that provides certification, professional mentorship and connection to a vast network of over employers for placement service.

A coordinated network of organizations dedicated to serving the military community by connecting them to resources for their specific needs.