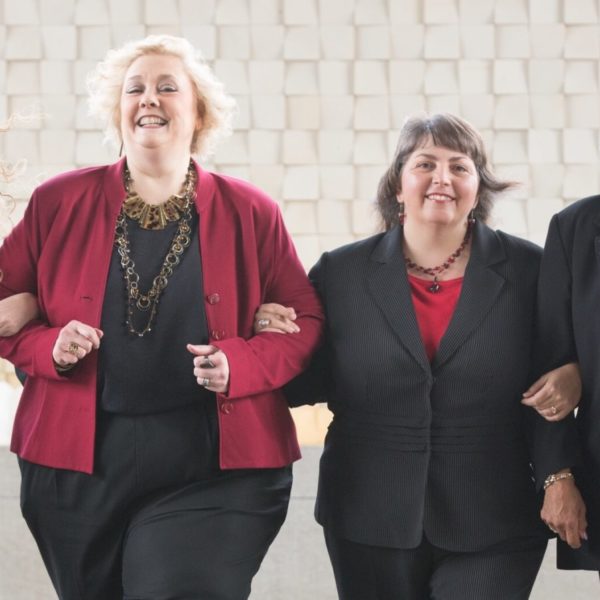 There are approximately 21 million veterans in the United States. Two million of them are women and, of those, over 163,000 live in California. Yet, as Jodie Grenier, the Executive Director of the Los Angeles-based non-profit Foundation for Women Warriors notes, many women veterans re-enter civilian life with little help. The aims of the foundation are to ease the transition of these women into the civilian world, assuring, as best it can, success; and creating a network of other women who understand the struggles.

Founded originally in 1921 as Military Women in Need, the organization first formed to assist war widows. As more and more women joined the military, that mission changed. Yet it took Grenier, who joined in 2016, to officially change the name. “I absolutely hated the name,” Grenier says. “Our members may need help but they are also warriors themselves.” Part of Grenierʼs passion, in fact, is to enlarge our understanding of what a warrior looks like. “Who is a warrior?” she asks, “Itʼs a woman who picks up her kid at daycare. Itʼs a woman who goes to school. Itʼs a woman who leads the board meeting.”

Much of Grenier’s sense of purpose stems from her own transition into civilian life. When she joined the military in 2000, she was straight out of high school. She served two tours in Iraq as an Intelligence Analyst before being discharged in 2005. It was, to say the least, a rough transition. Grenier returned to live with her parents in Connecticut and found work as a bartender. “I went from briefing generals to serving shots to guys in college,” she said. Soon, Grenier returned to conflict zones, working as a contractor in Iraq and Afghanistan. She finally left her role as a contractor in 2011 and realized that women face fundamentally different experiences than men. Like their male counterparts, women veterans often leave the military without sufficient knowledge of how the civilian world works. “They often do not know how to manage money,” says Grenier, “and all of their mentors are in the military.” But unlike men, women are more prone to go through the transition alone. “There are so few women in the military,” she says, “you often transition without female peers.” Finally, the same skills lauded in the military – among them being assertive, standing up for yourself, being aggressive when needed – are often looked down upon in women in the civilian world.

Grenierʼs mission is two-fold: to create a network of professional civilian women to help serve as mentors to women veterans, and to build the network of women veterans themselves. By connecting a community of veterans transitioning into the civilian world with a community of civilians eager to help them, Grenier hopes to give these warriors the tools to succeed off the battlefield. So far, the mission has been overwhelmingly successful.

Board Member, Foundation for Women Warriors

“When I arrived in 2016,” says Grenier, “I came in like a demolition ball.” First the name changed. Then the website changed. “I didnʼt want stock images. I wanted actual veterans,” says Grenier, with passion. And she aggressively mapped a strategic path forward for the nearly century old organization. None of this, she says, would have been possible without the board and chief among them, the powerful voice of retired Lieutenant Colonel Patricia Jackson-Kelley. “If I didnʼt have her support,” says Grenier, “nothing would have happened.” A veteran of the Grenada conflict, Jackson- Kelley quickly took a shine to Grenier. “Sheʼs like a daughter to me,” she said. Jackson-Kelley was impressed by the younger womanʼs leadership. “She is one of the fiercest, most tenacious leaders I have seen in quite a while.” Jackson-Kelley saw that Grenier had a thorough grasp of what the modern woman warrior needed for success in the civilian world and an idea of how to transform the organization to better provide that. And so she went to work. As a board member of the Foundation for Women Warriors, as well as holding leadership roles in a variety of other regional and national veterans organizations, Jackson-Kelley comes into contact with veterans almost daily. She sees first-hand how programs like the Foundation for Women Warriors lead to positive life changes for the veterans touched by them. The women regain confidence, their identities, and a network of support through their newfound community of peers, mentors and friends. “I speak at churches and social centers all the time,” she says, “and I always remind them why I chose to become a board member of the Foundation for Women Warriors.” Today, the Los Angeles-based Jackson-Kelley offers her advice and hard-fought knowledge to Grenier and speaks on behalf of the group across the country. “Sheʼs truly incredible,” says Grenier.

Since many veterans – both women and men – come out of the armed forces with the do-it-yourself mentality of their active service, finding veterans who need help can be a challenge. Sometimes, says Billiekai Boughton, herself a veteran and head of San Diego Women Veterans Network, calling for help “feels like a thousand-pound phone.” To alleviate that weight, Boughton assembles service providers like Foundation for Women Warriors and veterans themselves through networking events. “In this case, the market overlap is beneficial to the veterans,” she said, “Jodie knows people that I donʼt and I know people who she doesnʼt.” Recently Boughton and Grenierʼs organizations partnered to host an event called Connect with Community, where 21 non-profit service providers from aquatic massage therapists to business recruiters gathered en masse to meet with 38 veterans. As two women veterans themselves, Boughton and Grenier are uniquely attuned to the challenges faced by their constituencies. For their next event, one promoting healthcare for women veterans, Boughton will provide the space and vendors while Grenierʼs organization will cover childcare. “A vet isnʼt going to show up,” she said, “if they donʼt have someone to look after their child.”

Just as Boughton helps Grenier build her network of female veterans, Michelle Bergquist of Connected Women of Influence helps with the civilian mentors. “Michelle gives me a whole pool of potential women who are in different aspects of business,” says Grenier. For Bergquist, who is not a veteran, getting to know Grenier showed her “a bridge that is broken between getting out of the military and getting into business, and itʼs one we can help repair.” Too often, she says, civilian C-suites overlook the large and qualified pool of veterans in their midst. Often itʼs because they donʼt see them. By joining with Grenier, however, Bergquist brings the civilian and veteran worlds together. Members of Bergquistʼs Connected Women of Influence group frequently mentor veterans from the Foundation for Women Warriors, both in group settings and in one-on-ones. But a large part of what Bergquist and Grenier do is increase the visibility of women veterans to business leaders in a position to hire them. “We learn from each other,” Bergquist explains.